The future of money: humans need to keep the robots in check 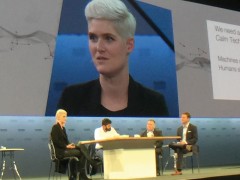 Udayan Goyal’s vision for the future of money revolves around seamless, instant micropayments being made continuously between autonomous apps and services all triggered by thoughts and actions of humans as they go about their daily lives.

Kicking off the Future of Money plenary with an animated film of his view of the world of the future, Goyal – the co-founder and managing partner at Apis Partners and Anthemis Group – described a world where the internet of things (IoT) and the world of payments combine to make everything you can possibly dream of happen. Ironically, the animation was hand drawn by a team of artists in India, rather than being rendered by the latest CGI technology – and this proved to be something of a leitmotif for the plenary.

This idea that an interconnected world – driven by interconnected payments – needs to be moderated at all stages by humans quickly emerged as the theme of the talk and was echoed by all the panellists. Jon Stein, chief executive and founder of Betterment, a service that automates the way people manage their money to save for a pension or college fund, said: “Betterment is a robo-advisor for people’s money. While that sounds totally automated, interventions and contact with people are key to customer service.”

This was also how Carlos J Menendez, president, enterprise partnerships at Mastercard, views increasing automation across financial services. “Consumers need trust and that comes from making sure there is ample intervention from humans in all the automated processes that we currently have and that we are likely to develop in the IoT future.”

This was echoed by Doug Shulman, senior executive vice-president at BNY Mellon, who listed security, trust and interconnectedness as the three most important factors in developing new services. “In the interconnected world in which we live, we still have many proprietary stacks of technology but we intersect now more and more with third party technology to deliver the services we want.”

While technology is used to automate things, we don’t want to turn ourselves into robots, said Amber Case, fellow at the Harvard Berkman Klein Centre. “Machines are really good at spotting patterns and humans are really good at curating things. We should use machines to collect data, but people must be the ones that design the systems that then use that data to make life better. Technology is ready for us, but are we ready for technology?”

Customer support and user experience are what people really need, she added. “Systems are very brittle: they have a problem and they collapse. We need to look at how to make them more human so that when something goes wrong with them they survive and this needs people to step in to manage and run the technology. We need cybernetic feedback loops that are part machine and part person. We mustn’t lose sight of the fact that technology was created by people for people.”

Where does this leave the future of money? To make Goyal’s vision a reality everyone in technology and banking circles has to take the view that technology isn’t the answer, it is just a tool. People seem to be what will make it tick. People hold the power: how disruptive is that?