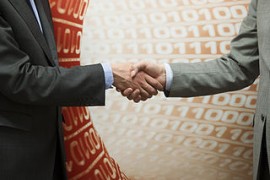 A central securities depositories (CSDs) consortium has been founded to help emerging market CSDs investigate and take advantage of new technologies such as blockchain. Led by Russia’s CSD, National Settlement Depository (NSD) and South Africa’s Strate, the consortium will initially focus on working with CSDs in Africa, the Middle East and Eurasia.

A workshop on Saturday prior to Sibos outlined the concept to a number of representatives from CSDs. The idea originated from a conversation between the chief executive of Strate, Monica Singer, and Eddie Astanin, chairman of the executive board at NSD, during a CSD symposium in May this year. They both realised their organisations were conducting proof of concept exercises on the use of blockchain in proxy voting. “The similarities were enormous,” said Singer, “and proved the reason for us to come together in this way.”

Astanin added: “We were spending the same amount of money to investigate the same solution. We decided it didn’t make sense to do this but would be better to share costs as we were moving in the same direction.”

The concept of collaboration in the CSD space makes sense, said Singer, as it is not a competitive area and CSDs worldwide comply with the same principles, risk management, licensing rules and regulations. Also, CSDs already engage in a great deal of collaboration, with a series of regional consortia overseen by the World Forum of CSDs.

A focus on the emerging market CSDs reflects the fact that in these markets they tend to be smaller organisations and do not have the resources or know how to pursue their own technology programs. “Such CSDs will benefit more from joining a consortium,” said Singer. Astanin added that emerging and frontier CSDs were keen to understand how blockchain and other technologies could help them to improve customer service and to build trust in their respective financial markets.

Singer pointed out that much of the talk about blockchain in the securities industry emphasised custodians and that there was an assumption CSDs would be disintermediated by the technology. However, she argued that CSDs were an important part of the financial markets, acting as a trusted third party. They also weathered the financial crisis of 2008 while many other organisations fell by the wayside.

“CSDs are not going to be eliminated in a hurry,” said Singer. “But we must be mindful that we cannot ignore new, disruptive technologies. In this consortium we have decided we will embrace these disruptive technologies and investigate how to apply them to our business.” The role of the CSD could change with the introduction of distributed ledger technology, but the financial markets require a trusted third party, she said. In a blockchain world, CSDs could retain overall supervision of a ‘golden copy’ of transactions in proxy voting, for example.

The consortium will enable CSDs to approach financial technology vendors as a group, rather than conduct bilateral conversations with them whereby the vendor subsequently sells the same solution to each CSD. “We will work together as a consortium, developing RFPs and approaching vendors to create our own ecosystem for financial markets around the world,” said Singer.

There are many areas where new technologies can bring in efficiencies and improvements, such as corporate actions, said Singer. “We need to tap into those possibilities but not do that individually.”

The consortium will begin with a proof of concept on proxy voting, that will act as a test case “to prove we can work together”, said Singer.