Suncorp’s multi-year venture to modernise its core banking system, known as Project Ignite, is in its final stages.

The new platform is now live for customer, collateral, collections and loan origination processes. Deposits and transaction banking are still to go – Suncorp expects these to be migrated before the year-end.

Project Ignite was initiated in 2011, with the bank signing for a range of solutions from Oracle FSS, including Oracle Banking Platform (OBP, the vendor’s new high-end core banking offering), Flexcube for trade finance and Oracle CRM.

The initiative was set to rationalise the bank’s product set by half, the decommissioning of 12 legacy systems and re-engineering of 580 processes.

On the way out is the Hogan legacy platform from US-based CSC. Back in 2010, Suncorp voiced its concern that Hogan lagged behind more modern offerings and that the talent-pool for maintaining the system was shrinking as the majority of the developers were nearing retirement.

Incidentally, speaking at an investor call in May 2014, the bank’s CEO for business services, Jeff Smith, said that he would be worried about “any bank running Hogan in three years’ time”.

Suncorp is still working its way through the decommissioning efforts, Banking Technology understands. This will be completed next year. As a result, the bank anticipates it cost to income ratio to be driven below 50%.

A number of legacy systems have already been switched off, including those for collections, personal lending origination and collateral.

The bank is emphasising the enterprise-wide nature of its transformation, with a lot of work already done for its large insurance operations and with other phases including areas such as cards – where it has replaced CSC’s CAMS system – and business intelligence.

“The new core banking platform has delivered a simplified and resilient technology infrastructure,” Suncorp states. “It provides agility and decreased time-to-market for new products and offerings, including the delivery of innovative and digitised banking services.”

The bank will now focus on “building new digital services and accelerating investment in internet banking and mobile applications”. 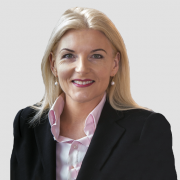 New tech leadership
Project Ignite is the brainchild of Matt Pancino, ex-CIO of Suncorp, who is now heading for pastures new at the Commonwealth Bank of Australia (CBA).

His replacement at Suncorp is Sarah Harland. She will start in her new role in September this year.

Harland was briefly CIO of health insurer Medibank Private, which she joined in January this year. At the time, Medibank was most of the way through a mammoth AU$150-million tech overhaul, centred on the replacement of its core policy and CRM systems. SAP was supplying the software and IBM was the integrator.

Prior to that, Harland spent nearly five years at ANZ as general manager of technology group functions.