Soumik Roy: the bank of the future in India needs to be a tech company first, a provider of financial services second

Electronic banking and payments are rapidly picking up pace in India; citizens love the convenience, the government hopes it will drive transparency and reduce the impact of counterfeit currency, and entrepreneurs are enthusiastic about the business opportunity.

The memo issued earlier this year by the Ministry of Finance in India states the government’s commitment to electronic money. The memo is clear that the Ministry of Finance aims to provide the necessary incentives to use digital financial transactions to replace the use of cash – either in government transactions, or in regular commerce over a period of time through policy intervention.

According to reports, mobile wallets (m-wallets) are the fastest growing paperless mode of payment in the country, and settlements through the various m-wallet partners reached the INR 1,000 trillion ($15 billion) figure in FY 2015.

Paytm, one of the largest m-wallet companies in India, announced it had 100 million users in August 2015, and added another 22 million active users by the end of March 2016.

As a result of the economy’s newfound affinity for mobile payments, banks are making serious efforts to introduce m-wallets into their portfolio and avoid the loss of business to disruptive start-ups. Some are creating their own mobile wallet app, some are partnering with established mobile wallet providers, which others are doing both.

HDFC Bank, for example, launched its own app, PayZapp, but also partnered with another payment app, Chillr.

Meanwhile, ICICI Bank launched “Pockets”, a payment app that boasts of integrating the mVISA payment solution for the first time in the world – and of being downloaded over three million times so far.

The bank of the future is a technology company

India is a great market for fintech innovation. Penetration of financial services is still low, a million young adults are joining the workforce every month and will need banking and investment services, and the government is gradually removing the industry’s barriers for entry.

The establishment of the payment bank by RBI Governor and technocrat, Raghuram Rajan, and the grant of 11 new “payment bank” licences to companies from a variety of sectors, including telecoms and postal services, is clear evidence the country is gearing up for transformation.

All things considered, the bank of the future in India needs to be a technology company first, a provider of financial products and services second.

One of Asia’s prominent banking players, DBS, seems to be working towards that – and quite successfully. Late last year, the bank took a calculated risk and launched India’s first mobile only bank, known as “digibank”.

Promoted by cricketing legend Sachin Tendulkar, and powered by Kasisto – associated with creating Siri for Apple, DBS seems to have found an ideal model to cater to the market in India.

Local media reported that digibank aspired to garner five million customers, and a deposit base of INR 500 billion ($7.4 billion) over the next five years. Considering the technology and strategy DBS is using, these look like plausible benchmarks. 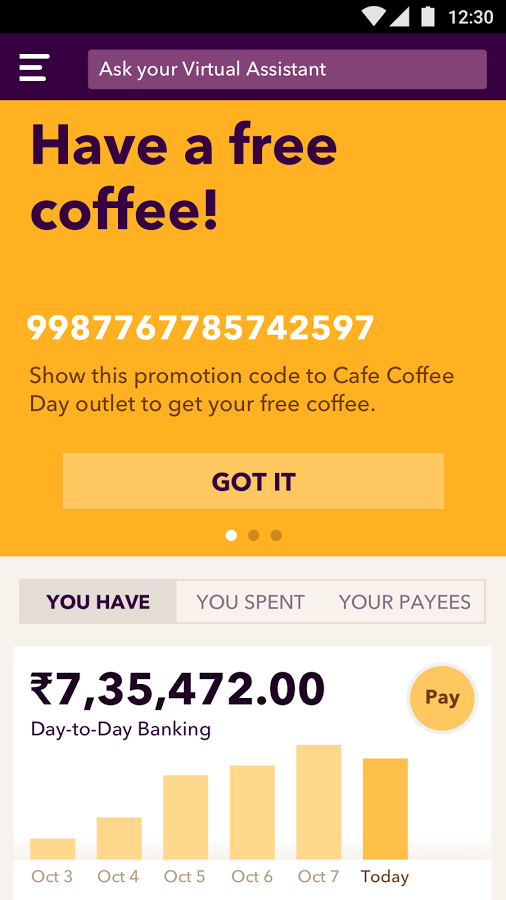 Opening a bank account is simple: download the app, register in 90 seconds, and get access to an e-wallet immediately. Provide your Income tax permanent account number (PAN) and your Aadhaar number with your biometric-information (Aadhaar is a 12-digit individual identification number issued by the Unique Identification Authority of India), visit one of the 500 local Café Coffee Day (CCD) outlets for biometric verification, and you’re all set to use your “paperless, signatureless” bank account.

There is no minimum balance requirement, no fees for non-maintenance of any average monthly or quarterly balance, an opportunity to earn up to 3% more interest on deposits as compared to traditional savings accounts, and the facility to withdraw cash from the 200,000 ATM machines in the country. Cash withdrawals will be done through the use of a physical Visa debit card.

All those features automatically make it better than any existing savings bank product, but there is more. The app boasts of an embedded soft-token security key that rids users of the hassle and risk associated with one-time passwords.

What’s more exciting is the 24×7 virtual assistant powered by Kasisto’s artificial intelligence (AI) platform. It uses experimental conversational technology to answer over 10,000 different questions – and constantly adds to its ability to answer questions by learning more about its customers and needs, every single day. This reduces the dependence on customer service agents at call centres, and saves time for their customers, and translates into conservation of resources for the bank.

DBS seems to be a modern organisation that doesn’t operate in silos, isn’t afraid to try new things, and aims to spot trends and stay prepared for the modern disruptive business environment.

Its strategic partnership with the aforementioned CCD, for example, is one of a number of innovative tie-ups. In 2013, DBS partnered with 500 7Eleven stores in Singapore to increase its physical touch-points by 25% across the island nation.

What’s the next big thing for digibank? Well, DBS has a strategic partnership with cognitive computing marvel IBM Watson, which is being used to create a platform to provide unbiased financial advice to wealth management clients. Digibank plans to provide investment services to clients in the future, and if it makes use of IBM Watson, it might be able to stir up some magic yet again.

Mumbai, the financial capital of India, was cited as a “major fintech hub” in a recent report that analysed the evolving landscape of the global fintech industry, and found the country raked in 38% of fintech investments in the Asia and Asia-Pacific region in 2015 – which quadrupled in 2015 to $4.3 billion.

Paytm alone raised $700 million last year. It further raised $400 million this year for the payment bank that has been granted a licence by the regulators.

Competition for digibank is likely to come from home-grown enterprises that are funded and groomed by international venture capitalists. Part of Paytm’s phenomenal success, for instance, is attributed to its close association with China’s Alibaba group and its founder Jack Ma.

DBS is also likely to face tough competition from new payment banks, such as those created by India Post and telecom giant Airtel. Once they are up and running, these players with well-established distribution networks might be able to quickly win a share of the hearts and wallets of existing customers, and turn them into advocates for their brand.