In an earlier post, I provided some of the top-line findings from the Federal Reserve Board of Governors’ recently released Consumers and Mobile Financial Services 2016 report. Safety and risk continue to be cited by consumers as significant barriers to their adoption of mobile banking and other new payment technology. Many consumers either don’t believe that the mobile banking channel is safe or they don’t understand the security features that are part of the mobile technology. The research effort probed these issues in greater detail to better understand consumer perspectives. 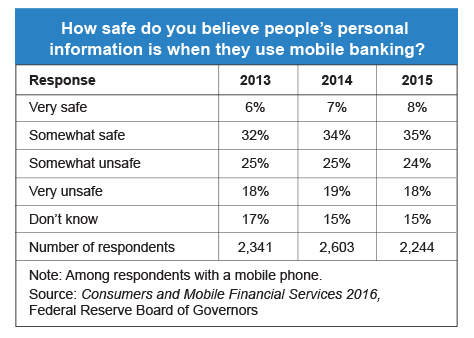 In a separate survey question, a slightly higher percentage of respondents (46 percent) believed that their personal information was “very unsafe” or “somewhat unsafe” when conducting a mobile transaction at a store.

When mobile phone users were probed about their specific security concerns about using their mobile phone for banking or payments, their most common response was that they were concerned about all of the listed security risks. For those who chose one specific reason, they most frequently cited fears about the phone being hacked or the data being intercepted, followed by concerns about their phone being lost or stolen.

On a positive note, consumers appear to be adopting more secure mobile phone practices. The percentage of smartphone users who password-protect their phones increased to 70 percent in 2015 from 61 percent in 2013. One-third of the smartphone owners were using antimalware software or applications to protect their phones, and a similar share used an app or service to help them locate, remotely access, erase or disable their phones in the event their devices are lost or stolen.

Additionally, consumers are recognizing the need for improved authentication with their banking service providers. Seventy-four percent of smartphone owners indicated they either “strongly agree” or “agree” that they would be willing to undergo additional authentication steps when they were logging in to their mobile banking service.

These findings and more in the Fed’s report demonstrate that the industry must intensify its consumer education efforts on security if they want their investments in mobile banking and mobile payments to pay off.

David Lott is a payments risk expert in the Retail Payments Risk Forum at the Atlanta Fed. This article originally appeared on the reserve bank’s blog Take on Payments. He can be reached at [email protected].