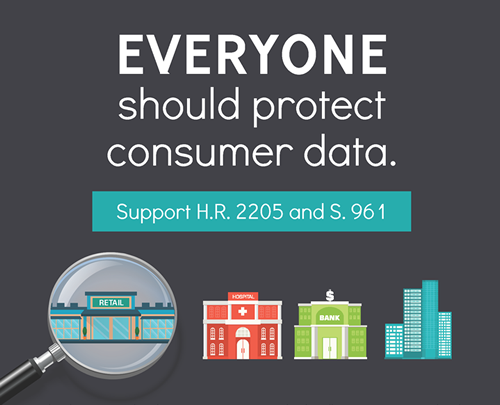 Members of the financial services industry have launched a media campaign in support of bills they say would provide better protection of consumer data, bring retailer accountability for data breaches in line with the financial sector and supersede myriad state laws pertaining to breach-notification regulations.

The Data Security Act (H.R. 2205) was introduced in May 2015 by Reps. Randy Neugebauer (R-Texas) and John Carney (D-Del.), and a companion bill (S. 961), was introduced by Sen. Thomas R. Carper (D-Del.). The bills extend data protection and consumer notice standards under the Gramm-Leach-Bliley Act (GLBA) beyond financial institutions to all businesses handling personal and financial data, among other stipulations.

A contingent of financial services providers recently have been ramping up their support of the bills by purchasing online ads and full-page newspaper ads aimed at federal legislators.

“All entities that handle sensitive financial data should be required to protect that data,” Jason Kratovil, vice president of government affairs for payments at Financial Services Roundtable (FSR), said last week. FSR is an advocacy organization for the U.S. financial services industry. “It’s long overdue for Congress to pass legislation ensuring that everyone has a similar mandate to keep customer data safe,” he added.

“Credit unions and other financial institutions already protect consumers’ personal data under the provisions of the 1999 Gramm-Leach-Bliley Act,” Carrie Hunt, NAFCU executive vice president of government affairs and general counsel, said in a statement last week. “There is no comprehensive regulatory structure similar to GLBA for other entities, such as retailers, that handle sensitive personal and financial data.”

Shortly after the bill was introduced last year, the National Retail Federation (NRF) bluntly said that everything about the legislation is wrong. “Banks have tough rules because a criminal hack could drain customer accounts in an instant and threaten the safety and soundness of the entire financial system,” but hacks to small businesses don’t pose the same risk, said David French, NRF senior vice president, government relations.

“We urge the FTC not to rely on PCI DSS for any purpose, particularly not as an example of industry best practices nor as a benchmark in determining what may constitute responsible data security standards in the payment system or any other sector,” wrote NRF Senior Vice President and General Counsel Mallory Duncan in a letter to FTC Chairwoman Edith Ramirez and other commission members.