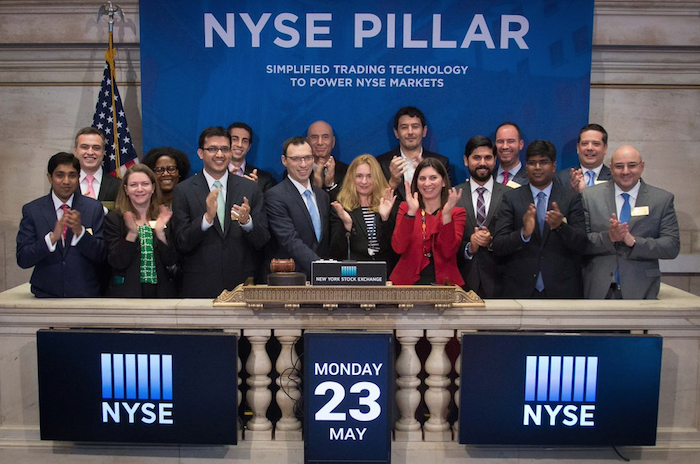 The new platform is underpinned by a matching engine – the core exchange software that runs trading – developed by Algo Technologies. Algo Technologies was set up in 2010 by former Chi-X Europe COO Hirander Mirsa and Rami Habib and Alexei Lebedev to target the high-frequency trading (HFT) market. In 2014, the vendor was bought by NYSE.

The roll-out of Pillar started in early 2016. In March, NYSE announced the completion of a “key phase” of the project and said it was on track in the testing stage.

On the 23rd May, NYSE rang the bell in celebration of the launch of Pillar.

“Pillar has been designed to reduce complexity, while enhancing consistency, performance and resiliency,” states NYSE.

NYSE highlights the benefits of the new platform such as more efficient processing, shorter time to market for ongoing enhancements and simplified, harmonised order types, terminology and messaging across all of NYSE markets.

NYSE Arca Equities was first market to migrate to Pillar.

NYSE’s plan to overhaul its trading engine with Pillar was unveiled in early 2015.

After buying NYSE in 2013, ICE determined that the exchange’s systems were outdated and slow, prompting the acquisition of Algo Technologies, according to Bloomberg. Algo Technologies touted its matching engine as the industry’s fastest.

“It is probably long overdue for NYSE to upgrade both Arca and NYSE proper,” Sang Lee, managing partner at research firm Aite Group, told Bloomberg at the time. “And it also makes a lot of sense to have a single platform to run the entire cash equities franchise, streamlining any vendor relationships and being able to reduce maintenance and upgrade costs associated with multiple technology platforms.”