Viewpoint: What the Contactless EMV Push in the U.K. Means for the U.S.

The UK Cards Association reported recently that contactless transactions in that country were up more than 200 percent from December 2014 to December 2015. It seems that seven years after issuers and retailers began enabling contactless EMV (“tap-and-go”) payment functionality for their customers, consumers finally are responding. The U.K. experience may be a predictor for the likely adoption of dual-interface cards and other types of contactless payments.

U.K. banks began issuing dual-interface cards (i.e., cards that support both contact and contactless EMV transactions) shortly after the market shifted to EMV in 2008. By 2012, the national Post Office, the London bus system, many prominent fast food chains, grocery stores and retailers began accepting contactless payments without a PIN for transactions below £20 (US$28). The major card networks promoted NFC terminalization in the London metropolitan area prior to the 2012 summer Olympics, creating a catalyst for the growth of contactless payments via cards as well as emerging mobile wallets. 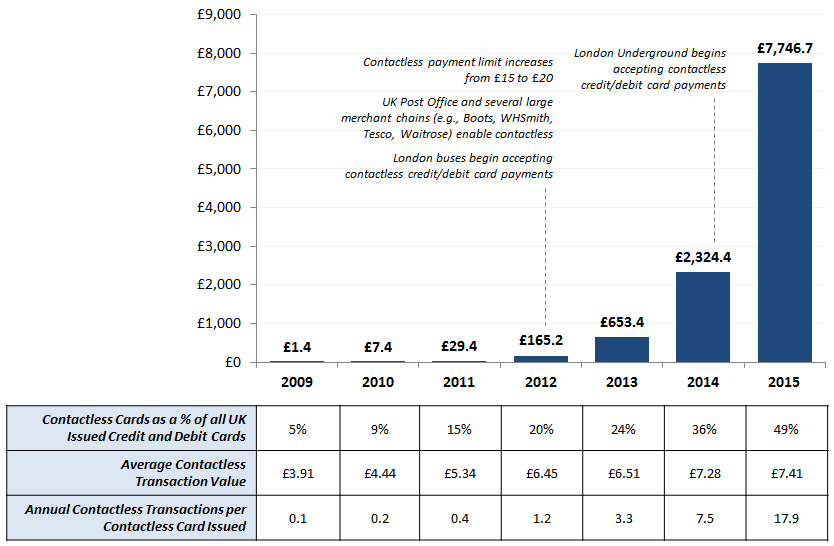 Comparisons of the U.K. and the U.S. payments market must be approached with caution. The in-store rollout of EMV in the U.S. is occurring relatively slowly; however, mobile NFC payments (e.g., Apple Pay, Android Pay, and others) could spur faster adoption of contactless payments generally. Contactless EMV cards and mobile NFC payment systems use the same contactless ISO payment specifications from the payment networks, and many U.S. merchants have upgraded to EMV terminals that also are equipped for contactless payments.

Some issuers may forego the more expensive dual-interface EMV card option if they can push consumers to a contactless mobile wallet solution instead, but many banks likely will offer both. Regardless of form factor, the U.K. case study suggests that contactless payment adoption will likely be a multiyear process in the U.S., but once card and terminal enablement reaches a tipping point, consumer adoption may be rapid.

Stephen Kiene is a Senior Consultant in the Payments Strategy and Innovation practice at First Annapolis.  His recent experience includes engagements related to EMV strategy and implementation, issuer mobile strategy, fraud operations, and vendor selection and negotiation processes.  He can be reached at [email protected]