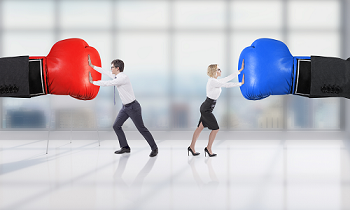 When more than 3,700 people gather in one place to talk about payments, you never know what you’re going to get. But the inaugural Money20/20 Europe conference in Copenhagen earlier this month left me with one major theme—partnership. There seemed to be a marked shift in the way banks and other payments incumbents are talking and thinking about fintech startups and vice versa. For the most part, both sides seem to have come to the realization that the key to success is to put rivalries aside and join forces.

Banks definitely have taken notice of what’s happening in the fintech space, said Matt Harris, managing director, Bain Capital, during an introduction of the three StartupPitch competition winners at the show. He likened the state of the fintech industry to the second movie in the original Star Wars trilogy—The Empire Strikes Back.

“Banks are getting frisky,” he said, pointing to aggressive investments and product launches to fend off would-be disruptors. At the same time, many banks and startups have realized that the road to success is one in which the two sides come together in partnership, he noted.

During a fireside chat with Liz Lumley, director, global ecosystem development Startupbootcamp FinTech & InsurTech, HSBC’s Group Chief Operating Officer Andy Maguire said: “For everyone who’s trying to eat our lunch, there’s something to learn.” But he was skeptical about the prospects of traditional banks being displaced, largely because they have an infrastructure that “nobody could or would want to build today. Where people want to partner with us, that’s where it gets very interesting.”

The bar for uptime, security and compliance is higher for those partnering with financial institutions than other industries. Algorithms that are usually correct, aren’t good enough, Maguire noted. Banks have to be right and the system has to be reliable. “Just because something works for streaming music, doesn’t mean it will work for money,” he said. In addition, Maguire said global banks don’t want partial solutions or solutions that only work in one market. “I need whole answers, not bits of answers,” he said, adding that stitching multiple solutions together from a variety of providers is more challenging. But he insisted that HSBC provides “the largest sandbox in the world.”

PayPal Europe CEO Rupert Keeley echoed the call for partners. “We have a vision to provide a much broader range of payments,” he said, pointing to cash, direct deposit, credit, checks, P2P, bill pay, in-store payments and international remittances. “In some areas we could go it alone, but it just makes more sense to partner,” Keeley said. Although he touted several of PayPal’s acquisitions, including Braintree, he suggested PayPal is looking to partner with large companies with large scale and great brands rather than smaller startups. However, Keeley also touched on EU regulation, including the Second Payment Services Directive (PSD2) and a recent green paper that he says will open up the market to more players of all sizes.

Keeley wasn’t the only one excited about the possibilities around PSD2. Many experts believe the regulation may serve its intended purpose to level the playing field for smaller payments companies and technology providers. One of PSD2’s requirement is to open banking architecture to developers and other nonbanks via APIs.

“We see it as a huge opportunity,” Ray Brash, CEO and chairman of PrePay Solutions, says of PSD2. “All of our customers use open integration and see it as an opportunity.” PPS, which has been in the market since 2000, has established itself as a processing and issuing powerhouse that has long since achieved profitability and scale. To achieve this, PPS has worked with large corporates, telcos and retailers to build its payments business. Now, it’s also working with some so-called challenger banks and is looking for promising fintech partners in Europe. While Brash doesn’t foresee a lot of big banks knocking on his door for partnerships, he is excited about what’s still ahead in the digitalization of payments and PPS’s role in that shift.

“We’re focused on what we do really well,” Brash says, pointing to processing, issuing and some value-added services. “We see a role for different players in the space. Our mission is to find those companies that are totally focused on the end user and have exactly the right proposition, and we at PPS will provide all of the backbone.”

One of the areas that excites Brash is new approaches to lending. For example, one partner is working with employers to offer employees credit at a lower interest rate, which is convenient and cost-effective for the employee and provides the lender with assurance that the funds will be repaid through payroll deductions.

“The big question for me is the bubble,” Brash added. “Is there a bubble? No one is really making any money. There is some opportunity to challenge the banks but it’s not a straightforward process.”

Curve, a U.K.-based startup, is a challenger of sorts but is relying on partnerships with banks and nonbanks to become a conduit for all of a consumer’s financial needs. The company, which placed second in Money20/20 Europe’s startup contest, uses a mobile app and a single card to manage a consumer’s money by layering on top of the existing architecture. Curve, which works with Wirecard and MasterCard, among others, currently is testing its service with business travelers who need to manage personal and corporate spending. The company has big plans to offer a suite of ancillary services within the app, including credit, loyalty and cash back, explained CEO and Co-Founder Shachar Bialick.

But while Curve seeks to challenge banks in terms of providing innovative services, Bialick notes that it’s not displacing the current bank relationships. “Partnerships just reinforce the requirement of the bank. It’s trusted, secured and they are an integral part of the ecosystem,” he said, noting that banks will still hold deposits. “We want to be the gateway to all your financial needs.”

“I think there’s a lot more money poured into fintech than there’s been innovation that’s come out of it,” said Payoneer CEO Scott Galit, in a post-Money20/20 Europe interview. There’s been a lot of ‘me-too’ technology, but I don’t think I’ve seen a lot of sustainable, differentiated innovation,” he contends.

New York City-based Payoneer has come a long way from its startup days. The company now employs more than 650 people from Silicon Valley to Tokyo. Its payments platform enables businesses of all sizes to make payments or receive funds from more than 200 countries. But it didn’t get there by making an enemy of banks.

“We work with banks in every market we’re in and have very good relationships with them,” Galit noted. For the startups of today, he has seen a shift in the rhetoric as companies come to realize that it takes a lot of money and backend infrastructure to manage risk and compliance needed to support cool, customer-facing experiences.

At the same time, there’s so much change and so many new entrants, Galit believes the banks woke up and said: “We’re so far behind in so many areas, we can’t do this organically anymore.”

During an investor panel at the conference, Ramneek Gupta, managing director; Co-head Global Ventures Investing at Citi Ventures, agreed that banks need startups to push innovation, while the startups need banks for compliance. “It takes a long time to build those [compliance] muscles,” he said.

When considering investments, returns are important, but “our aim is largely strategic,” noted Mariano Belinky, managing partner at Santander InnoVentures. “We aim to find companies that can improve the value proposition for our [banking] clients. … There’s a good symbiosis between fintech and banks. They have disruptive ideas and innovation and we have scale and customers.”

“I think there’s a lot of investment in this market because there’s a lot of opportunity and it’s a big market evolving quickly,” Dwolla CEO Ben Milne told Paybefore. “Nonetheless, over the last two or three years those closest to the industry are starting to see that the simpler solutions are the ones that win. Maybe two years ago at this show we were talking about getting bank and national treasuries to change their currencies. That’s not going to happen.  … But there’s still plenty of room in the market for innovation.”

Iowa-based Dwolla was early in the fintech boom with its original plan to remove interchange from e-commerce transactions. The company continues to evolve and its real-time payments platform serves many different types of merchants, banks and businesses. Milne said the company is focusing its innovation efforts on applying technology to risk and compliance to lower overhead costs for customers, while creating net new revenue streams. The company also changed its pricing model—removing transaction fees and charging only for value-added services. “It’s been difficult for us to find that path, but now that we’ve found it it’s certainly where we focus,” he said, noting that since the shift, Dwolla’s revenue growth has grown on average 30 percent month over month.

Amir Wain, CEO of payments processor i2c Inc., told Paybefore that startups often fall into the trap of making promises that they can’t keep either because they never understood the problem fully or they were too keen to sign the contract without thinking through all the implications. The short-term investment horizon of venture capital firms puts pressure on the management teams to deliver results quickly, which, in turn, leads to signing imperfect deals just to show progress. This approach often backfires when there are product and service delivery issues, leading to customer abandonment and further delaying profitability. “Payments is a complex business and it takes more than an idea or a slick user interface to build and scale something sustainable,” notes Wain. As i2c expands its processing platform globally, Wain said he’s always thinking about solving problems for clients and their customers. “Technology by itself is never enough,” he said.