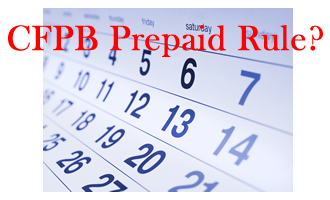 With the CFPB expected to release its long-awaited final rule on prepaid accounts sometime in the coming months, industry experts peered into their crystal balls last week during a panel discussion at Card Forum in Los Angeles, delivering predictions about the timing and potential effects of the looming regulation.

The release of the final rule already has been pushed back from the CFPB’s originally scheduled date of January 2016. In November 2015, the agency announced the rule would instead be released in spring 2016—but the industry still is waiting. (Technically, June 19 is the last day of spring, so we may have a few months to go.)

Brad Fauss, president and CEO of the Network Branded Prepaid Card Association, said the delays potentially were due to the rules still being vetted by government budgeting agencies—a step most regulatory agencies are required to perform before releasing new regulation. Another possible cause for the delay could be that the CFPB wants to avoid releasing multiple final rules too close together, Fauss noted; the bureau also is scheduled to release final rules on arbitration, checking overdraft and payday loans. Fauss predicted the CFPB would update the scheduled release date in its spring 2016 rulemaking agenda, due out in mid-May, and that the final rule will at last be released in late May or early June.

Whenever the final rule does see the light of day, the prepaid industry will face several challenges, and many participants will have to make some tough decisions about their business models and the types of products they can provide in the new regulatory environment, Fauss cautioned. One particularly problematic aspect of the 870-page proposed rule released in late 2014, was an overly broad definition of just what constitutes a “prepaid” account, he said. While the regulations would cover checking account substitutes such as GPR and payroll cards, they also would apply, under the rule’s language, to products such as some mobile wallets, prepaid reload packs, P2P payment tools and even non-reloadable product meant for one-time use as a check replacement.

Onerous disclosure requirements in the proposed rule could make providing non-reloadable prepaid products, such as insurance claim disbursement cards, a much more complicated process, noted Trent Sorbe, president of Central Payments, the prepaid issuing division of Central Bank of Kansas City. “What was designed to be a very simple check replacement now is going to carry with it the full weight of the compliance burden of an account substitute, even though it wasn’t intended to be that,” Sorbe said.

While the regulatory burden of the CFPB’s final rule will be considerable, there also will be some positives, the panelists noted. Chief among the silver linings will be that regulators and lawmakers no longer will be able to characterize prepaid as under-regulated. “The argument that there are no consumer protections for prepaid is now off the table,” Fauss said, adding that standard disclosures as a whole are a positive for consumers, as long as providers are given needed flexibility in how they’re required to make those disclosures.

Additionally, once the final rule is in place, the industry likely will be out of the CFPB’s crosshairs for a while, noted Sorbe. “After a major rulemaking like this, I think the industry can say, ‘Okay, they’re going to leave us along for a little while,’” he predicted. “Of course, we’ll be spending that whole time paying lawyers and compliance people to help us comply.”

Sign up to receive our complimentary e-newsletters for the latest on payments + commerce delivered to your email inbox.