Viewpoint: How Consumers Use Apple Pay

Recent First Annapolis consumer research suggests that only one in five iPhone 6 users has made a purchase with Apple Pay, and that the overall adoption rate for Apple Pay has plateaued from early 2015.

This finding, based on a survey of 1,279 smartphone users conducted in December 2015, indicates that—while there is much energy and excitement surrounding mobile payments—actual consumer adoption and usage still has a long way to go. 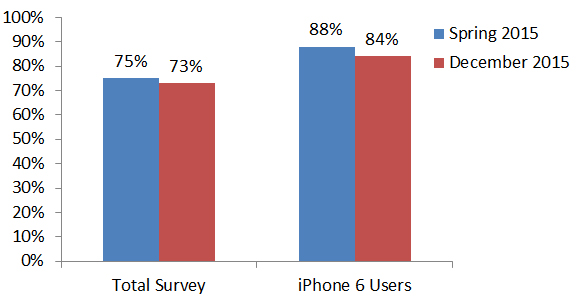 Of the nearly 600 survey respondents with an iPhone 6 (and therefore the ability to use Apple Pay), only 20 percent report having used Apple Pay at least once, down from 22 percent in the Spring survey but within the survey’s margin of error. Among those that have tried Apple Pay, only 15 percent say they use it regularly or frequently (i.e., more than once per month), compared with 19 percent in the Spring survey.

Most active users have loaded more than one card into Apple Wallet (formerly known as Passbook); respondents reported an average of 2.3 cards loaded in the December survey. Seventy-five percent of cards loaded were general-purpose payment cards (41 percent credit, 30 percent debit, 4 percent prepaid), while 25 percent were proprietary retail store or loyalty cards (see Figure 3), which Apple began enabling only in the second half of 2015 (e.g., the Walgreens Balance Rewards Card). 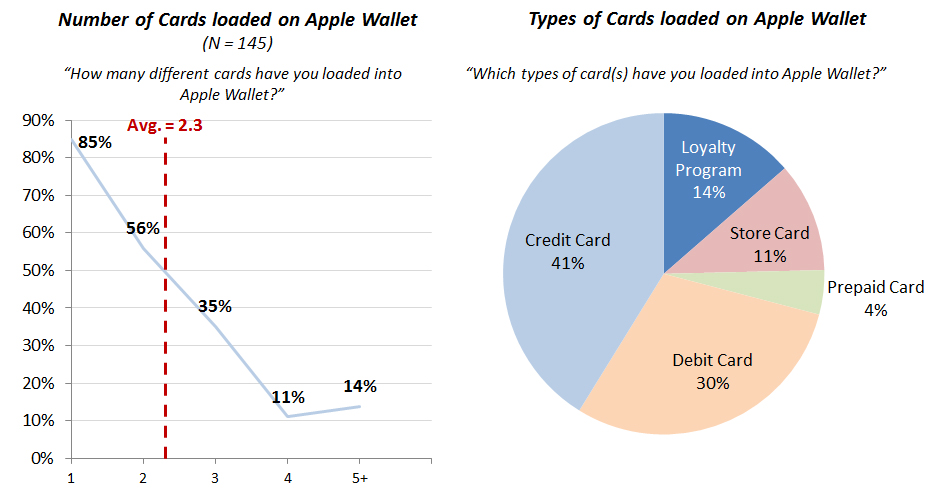 Despite relatively few NFC-enabled terminals in the market supporting Apple Pay transactions, the physical point of sale remains the primary origination channel for Apple Pay purchases. Among those that have used Apple Pay, 66 percent report having made a purchase in-store, while 52 percent report having made an in-app purchase. Between April and December, however, there was a notable increase in the number of users who reported using Apple Pay for in-app purchases only. This increase in the proportion of in-app purchases is likely a function of the limited POS acceptance for Apple Pay, continued incidences of difficulty in completing POS transactions—for instance, 24 percent of respondents reported that terminals did not work—and the recent integration with store/loyalty cards from national retail chains such as Walgreens, BJ’s, Kohl’s and J. C. Penney. 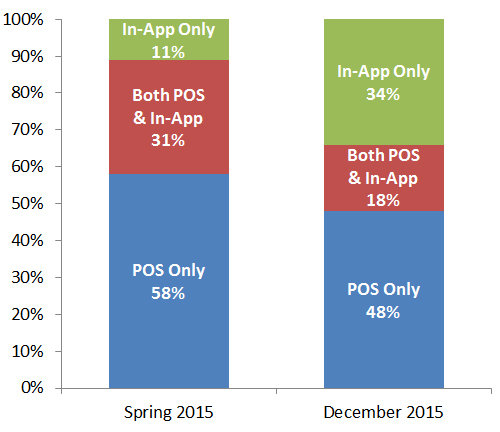 Figure 5: Apple Pay Satisfaction
“Overall, how satisfied or dissatisfied are you with the Apple Pay experience?” 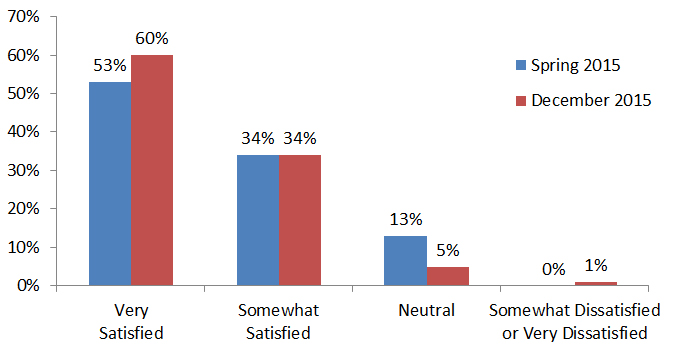 Consistent across both surveys is the extremely low level of dissatisfaction. This is an important indicator of potential long-term success—although it is also important to acknowledge that early adopters of Apple Pay may be more likely to view the product favorably as they may already be consumers of other Apple products and have a positive relationship with the company.

Apple Pay adoption and usage are low, but customer experiences to date are positive, as only about 20 percent of users report issues with the payment method; the latter represents an important first step towards longer-term adoption. That said, awareness and usage clearly plateaued over the course of 2015.

Based on these findings, factors limiting adoption of mobile payments need to be addressed, including the perceived utility relative to existing payment products and services, a lack of mobile application usage by some existing smartphone owners, and the limited merchant acceptance of NFC-based mobile payments.

Each of these factors will need to be addressed for Apple Pay to become more widely adopted. Payments innovations typically take a long time to gain market traction which implies that the plateau in awareness and adoption is most likely not a peak. We expect that awareness and acceptance will catch up to the hype in coming years.

Hugh Gallagher is a principal, focusing on mobile/alternative payments, innovation and payments strategy at First Annapolis Consulting. Hugh has more than 25 years of experience in payments and financial services. He can be reached at [email protected].

In Viewpoints, payments professionals share their perspectives on the industry. Paybefore’s goal is to present many points of view to offer readers new insights and information. The opinions expressed in Viewpoints are not necessarily those of Paybefore.