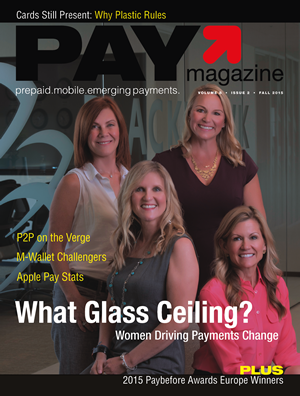 Last fall we profiled Talbott Roche, along with seven other female executives at Blackhawk Network, as one of the Women Driving Payments Change. Now she takes the helm of Blackhawk, a company she helped build from the ground up. “We have strong and talented women in many critical roles in our organization,” she told Pay Magazine. “I am passionate about women supporting women across Blackhawk and our broader industry. Fintech and payments have traditionally been dominated by men,” she added.

In addition to CEO, Roche will continue to serve as Blackhawk’s president, a position she has held more than five years. In her new role, Roche will oversee Blackhawk’s growth strategy, expanding the company’s product and solution profile, and directing all Blackhawk’s consumer and incentive business units, according to an announcement.

Roche has been an integral part of the company’s growth since she co-founded it in 2001. Since then, her upward trajectory has included stints as senior vice president for marketing, and product and business development. During her tenure as president Roche also was instrumental in Blackhawk’s successful 2013 spinoff from Safeway Inc. and IPO, which raised $230 million, increasing the market value of the company to $1.2 billion.

“I am confident in Blackhawk’s position as an innovative disruptor in the fast-moving payments industry,” Roche said in an announcement Feb. 22. “We will continue to grow through best practices and digital innovation in our retail and incentives businesses, and international expansion and acquisitions that meet our strategic and financial objectives.”

Throughout her career, she and Blackhawk have received numerous awards and recognition, including Roche being named one of the 10 Most Powerful Women in Prepaid, a Paybefore Top Digital Dollars award with Reloadit Safe and a 2010 Pay Award for Industry Achievement Winner, among others.

Roche succeeds William Tauscher, who will continue in his role as chairman of the board and leading the organization’s international business and its corporate development strategy and execution.

“We would not be the global payments innovator we are today without her contributions,” Tauscher said of Roche. “She has been integral to our rapid growth and diversification, and is well-suited to lead Blackhawk forward in the rapidly changing payments industry.”