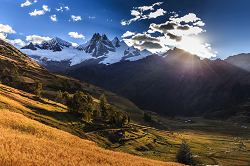 Peru’s new nationwide mobile money network has launched with the goal of bringing 5 million of the country’s unbanked citizens into the financial system over the next five years. Peru Digital Payments—a consortium of more than 30 Peruvian banks—has launched the service, called Bim, with support from the nation’s leading mobile carriers. Designed to work with simple feature phones, Bim enables users to make mobile money transfers for a fee of 50 Peruvian céntimos (15 U.S. cents). The service was built with Peru’s rural population in mind, many of whom live in geographically remote or hard-to-reach places where banks don’t have a presence. Bim plans to add more features in the future, including loans and other basic banking services.

Overall, fewer than one-third of Peruvians have bank accounts, one of the lowest rates of account penetration in Latin America, according to the World Bank. However, mobile phone penetration is high in Peru, with 30 million mobile phones in the country, which has a population of the same number. Last year, the Peruvian government launched a national financial inclusion push with the goal of providing at least three-quarters of adult Peruvians with a transaction account by 2021. The country also is one of 25 nations for which the World Bank has prioritized its efforts to increase financial inclusion.

Other feature phone-based P2P money services have had success in increasing financial inclusion in other countries—most notably M-Pesa, which launched in Kenya in 2007, and has since expanded to more than a dozen other nations in Africa, Europe and Asia.