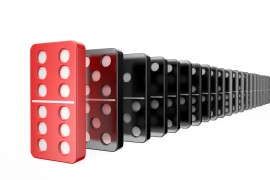 Central securities depositary Euroclear and consultancy Oliver Wyman have issued a report on the use of blockchain, the distributed ledger technology that underpins Bitcoin transactions, in capital markets. The firms arguing that major existing players will have to work with newcomers to create a framework that operates between firms and under regulatory obligations.

Blockchain and distributed ledger models allow settlement of a transaction to take place as part of the transaction, where the current model allows both counterparties to record the truncation separately leading to discrepancies between them. That potential for error spawns an entire industry of post-trade processing incorporating checks and reconciliation.

“The prize on offer is a new architecture, where all capital market participants work from common datasets, in near real-time, and where supporting operations are either streamlined or made redundant,” notes the report.

It recommends seven points that the industry should work upon in order to deliver an effective distributed ledger model: