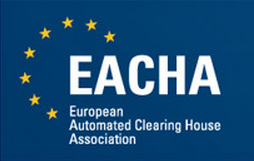 The European Automated Clearing House Association (EACHA) is to deliver a framework for ACH interoperability for instant payments by March 2016.

EACHA leads, upon invitation by the European Central Bank (ECB), a taskforce consisting of ACHs (including members of EACHA, EBA Clearing and representatives of Target2), national central banks, the ECB, and “ad hoc other stakeholders”.

The purpose of the group is to deliver to the Eurosystem (the monetary authority of the Eurozone) by March this year, a set of business requirements for ensuring risk management, clearing and settlement and interoperability of SCT-instant Payment. SCT stands for SEPA Credit Transfers.

EACHA’s interoperability framework will also be published in November 2016, “closely following” on the publication of the European Payments Council (EPC) Scheme Rulebook for SCT-instant Payment.

EACHA adds that it will build the new framework on the existing one developed in 2008 for the launch of the Single Euro Payments Area (SEPA) schemes.