I talk with a lot of banking leaders who describe their approach to innovation as being a “fast follower.” My typical retort is that they are half-right—most of them are definitely followers, but there usually isn’t anything fast about their approach.

Pioneers are the ones who get hit with arrows, and it is only natural that bank executives who are (quite appropriately) concerned with avoiding and managing risk as a large part of their job duties don’t want to be out on the bleeding edge of innovation.

The Risk of Not Taking Risk

Today more than ever, though, leaders should also be concerned about the risk of not taking risk.

The risk of not taking risk is much harder to identify and manage. It’s the risk of not investing in new ideas that can keep the company competitive, or even leapfrog the competition or create new products or markets.

While the payoffs can be huge, this is not a risk-free investment.

Not all new ideas will pay off. Some will be be total failures, and this is a hard reality to accept for managers who spent their careers making safer bets and avoiding losses. That’s the core operating model of banking, where nearly 99% of loans made are expected to be repaid in full with no loss.

Traditional retail and commercial bankers are not venture capitalists, where five total losses and four break-evens in ten investments is simply the price to be paid for the shot of at the one homerun that pays off all of the other bets and then some.

Bankers are more like fixed income investors, where the best outcome is a return of principal, plus a single digit interest rate spread on the principal.

The formula for winning that game is taking a large amount of relatively safe bets, with a pretty high confidence level that the risks involved are well known and quantified.

And so has gone the approach of most bankers, not only for their loan portfolios, but by extension their very business models, for literally centuries. This approach works well when the competitors are all similar and all are playing the same game by the same rules.

However, when new disruptive forces shake up the status quo, and new competitors this approach carries hidden risks. 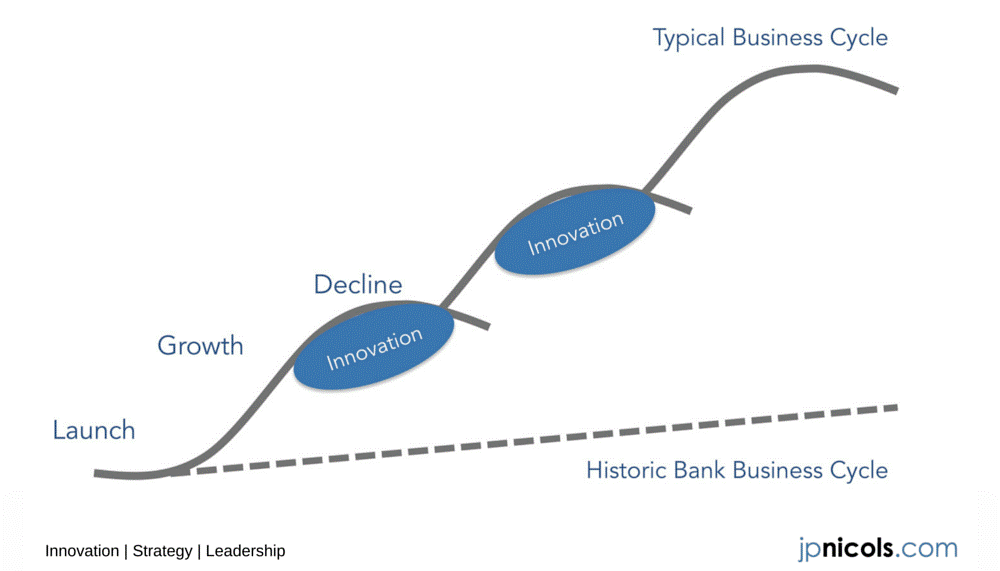 Most businesses have S Curve growth cycles—a flattish growth period during the business’ launch and early adoption, followed by a period of growth which eventually declines. If new products, customers or markets cannot be harnessed to jump to the next S curve, the business will die out.

This is a new phenomenon for banks, whose fixed-income investment approach to management has led to a more stable (and lower) growth trajectory, once adjusted for economic and interest rate cyclicality. In other words, what has historically caused variability in bank earnings has been changes in interest rates and economic conditions (and therefore loan losses and reserves), rather than major competitive shifts in the marketplace.

The rise of new competitors and new business models in financial services are forcing bankers to confront the S curve for the first time. Companies that thrive in dynamic industries are used to using innovation to effectively transition from one curve from the next.

Innovation is all about creating new options, and this is becoming increasingly important in banking.

Leaders, Learners and Laggards in Innovation 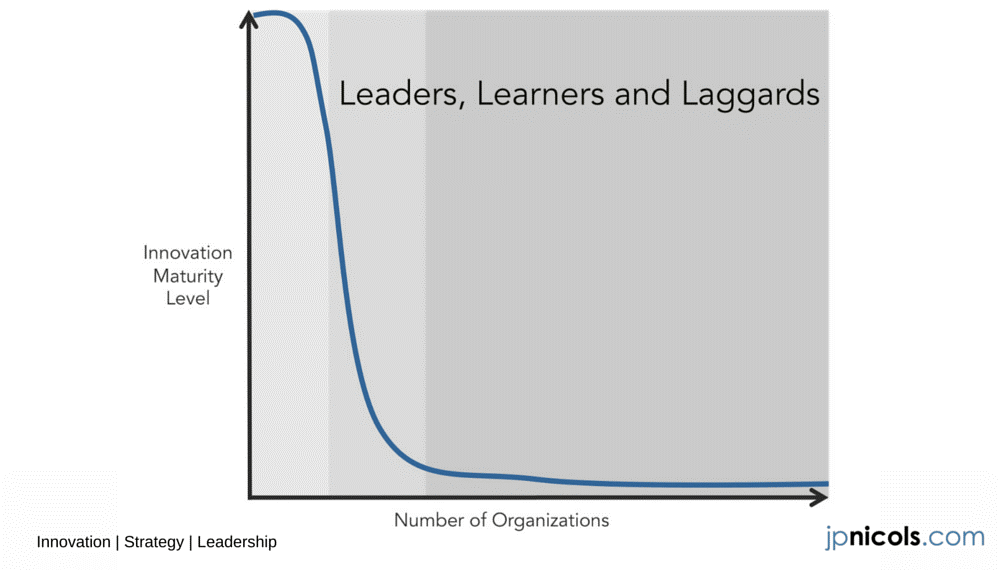 I have talked and written before about Leaders, Learners and Laggards in innovation.

There are just a handful of banks we could consider leaders in innovation. Leaders deeply understand the need to innovate and they prioritize ongoing innovation as a business activity just as necessary as compliance and asset-liability management. Senior leadership, from the CEO on down, require and reward innovative thinking, and they set a growth agenda for the company that puts emphasis on generating new sources of revenue. They try to disrupt themselves before someone else does it for them.

But Leaders don’t just rely on top-down strategies to improve and expand their business, they also encourage and invest in bottom-up innovation. Likewise, they supplement their internal innovation efforts with external involvement and investments in incubators, accelerators, hackathons, venture capital, and lots of other ways to engage in and help develop the broader ecosystem. Innovation is a 360 degree activity for Leaders.

A slightly larger, and growing, group of Learners have just begun to realize the need to innovate. Learners may even have pockets of innovation within the company currently, but they haven’t really embraced innovation as a business necessity. Early Learners may be infected by FOMO, the fear of missing out that arises from seeing others’ success, and they may be tempted to make token gestures to drive appearances rather than actual results.

Early Learners may also still think that merely adding the word ‘innovation’ to someone’s job description is a major accomplishment. If they are truly committed to learning though, they will discover that ongoing attention and support is needed to get business results from innovation. Later stage Learners start to realize the benefits of their efforts, and start to make additional investments to accelerate results.

Unfortunately, there is still a long tail of Laggards, the institutions that still don’t even know why they should innovate. Laggards still have tunnel vision on the way things used to be, so they can’t even see the changes happening all around them. They are convinced that success is just about perfecting their existing products and services, and they very narrowly define their competition as just their peer group of similar institutions.

Moment of Truth for Laggards

As the release of loan-loss reserves is no longer fueling bank earnings, and interest rates and loan spreads remain low, banks must innovate new revenue sources and new ways of delivering customer value. The gap between the laggards and the learners and leaders will only expand, and many laggards will be acquired by faster moving institutions.

Many laggards are simply unable to sense the shifting landscape, while others have willfully disdained what they perceived to be the riskier path of trying new things. The true cost of their inaction and ignorance will be borne out in the coming months and years.

As Warren Buffett says, “Only when the tide goes out do you discover who’s been swimming naked.”

Bank innovation consulting expert JP Nicols has been internationally recognized as a leading voice for innovation, strategy and leadership for the future of financial services. JP is a trusted advisor to companies from startups to the Fortune 500, a popular writer, a top rated speaker, and is often quoted in the press on video and in print. This article originally appeared on his blog. JP can be reached at [email protected]. Follow him on Twitter: @JPNicols.

In Viewpoints, payments professionals share their perspectives on the industry. Paybefore’s goal is to present many points of view to offer readers new insights and information. The opinions expressed in Viewpoints are not necessarily those of Paybefore.