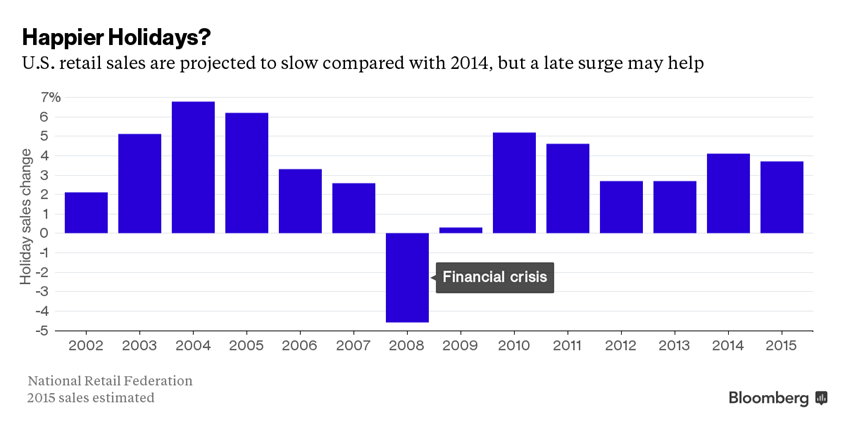 The 2015 holiday shopping season ended on a high note with a post-Christmas shopping surge fueled by a friendly calendar and shoppers looking to redeem gift cards in stores and online. U.S. retail sales were up 7.9 percent between Black Friday and Christmas Eve and 4.6 percent for all of November and December, according to data from MasterCard Advisors. Those figures are higher than many observers expected after a somewhat sluggish start to the season—especially in the brick-and-mortar sector, which saw store visits plummet as consumers opted to do their holiday shopping on the Web. In-store sales during the weekend before Christmas declined 6.7 percent compared to last year, while in-store traffic dropped 10.4 percent, according to RetailNext.

But shoppers returned to stores in droves immediately after Christmas, which fell on a Friday this year for the first time since 2009, giving shoppers two free days to spend gift cards and return items. The day after Christmas was the busiest Dec. 26 ever for in-store shopping, according to Customer Growth Partners. Savvy retailers have begun debuting new goods during the post-Christmas period, because consumers using gift cards are more willing to pay full price for an item, the research firm notes. Consumers also are more likely to spend a relatively low-value gift card—$15 or $25, for example—in a physical store, as shipping costs for online purchases would eat into a significant portion of the card’s value. Meanwhile, savings brought about by low gas prices left shoppers’ wallets a bit fatter this year, further contributing to the spending surge. Consumers spent 72 cents of every dollar saved from lower fuel prices, MasterCard said.