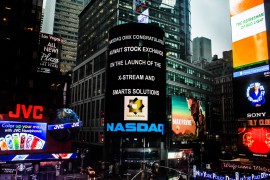 In mid-December, Borsa Istanbul went live with nine of Nasdaq’s technologies including trading and clearing, settlement, market data management, index calculation, market surveillance, business intelligence, and pre- and post-trade risk management. The initial implementation is for Borsa İstanbul’s equity market, and the exchange has also agreed to implement Nasdaq technology for its other markets, including derivatives, debt securities, and precious metals markets.

Nasdaq also engaged in new technology as a user in 2015 with the launch of its blockchain-based Nasdaq Linq private securities issuance. The firm recorded a private securities transaction in 2015 using the system which enables the issuer to digitally represent a record of ownership using the mechanism which cuts settlement time and digitises certification.  In November 2015, Nasdaq announced that it is exploring the application of its blockchain technology to proxy voting in Estonia, a second application of blockchain technology.

Within its projected operating expenditure for 2016 the firm said it expected to have US$35-US$45 million in R&D spending.