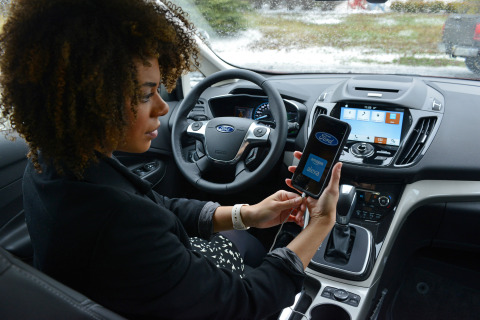 Ford Motor Co. wants to make it cars smarter by working with Amazon. The car maker says it is “working” with the e-commerce giant on a system that would enable drivers who are Amazon consumers to control garage doors and porch lights, access music, shopping and appointment lists, and perform other tasks while in their cars or their homes.

This move to connect home and cars via the Web represents one of the latest developments in the so-called Internet of Things. The term refers to appliances, household devices, TVs and cars that can connect to the Web and enable such tasks as payments and household controls. In this case, Ford links its SYNC Connect technology—which provides remote access to vehicles via a smartphone app—with Amazon’s Alexa cloud-based voice-recognition service, along with the retailer’s Echo, a speaker and voice-command device that uses Alexa and lets consumers stream music, surf the Web and control lights, switches and other household technology. Consumers can also use the device to re-order items previously bought from the e-retailer’s Prime free-shipping program. Amazon did not comment on the Ford project but says that Echo was among its best-selling products during the 2015 holiday shopping season.

Fords adds that it “also is working with” Wink, a platform that ties together Web-connected household devices from different companies. The idea is to give drivers more control over their households—say, to open garage doors or unlock front doors—via car dashboards or voice controls. “Consumers increasingly want to stay connected to their homes while on the move,” said Don Butler, Ford executive director, Connected Vehicle and Services. “Linking smart devices like Amazon Echo and Wink to vehicles via SYNC would fulfill that desire, and allow consumers to connect with their vehicles even when they aren’t behind the wheel.”

Ford says more than 15 million of its vehicles around the world have SYNC capabilities, with 43 million expected by 2020. At last November’s Money20/20 conference in Las Vegas, payment card network Visa showed off mobile payment features built into a “connected” car.