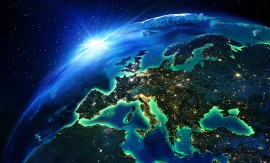 The new hub is a service that provides connectivity to Ripple, a payments processor which uses distributed ledger to provide real-time payments. The value of the hub itself is that it provides access via a single API to Ripple; Earthport plans to build it up by adding other distributed ledgers in the future.

“Our view is that the real value [of blockchain technology] comes out in cross-border payments,” says Daniel Marovitz, formerly of Deutsche Bank and now president of Europe at Earthport. “With the addition of distributed ledger in our toolkit, users will be able to go to nearly instant payment. So rather than T+1 or same day, which is what happens in most markets, we will be able to do it within minutes.”

Earthport uses a combination of Ripple to record the transaction and its own prefunded accounts to provide the liquidity and the FX rate to make the transaction happen as quickly as possible.

The extended service launched this month was created to simplify and accelerate the adoption and implementation of distributed ledger technologies in the industry – allowing banks to swiftly move into this new world of payments without additional heavy investment in infrastructure, compliance or operational requirements. Earthport says it now provides full access to the Ripple ecosystem through a single contract, a single technical integration, and a single service relationship – a factor that the company likes to emphasise because its overall goal is to have as many countries, currencies, accounts and payment types as possible available through a single API.

In addition to Ripple, through the same API, clients can access all payment methods in 60 countries, following the same compliance processes used in all Earthport transactions. Earthport’s services in the DLH are conducted entirely in Fiat currency with no use of crypto currencies.

“It is our belief that there may be different ledgers that gain traction over time – some will have a regional affiliation, and some may be more aligned by industry sector,” said Hank Uberoi, chief executive at Earthport. “Banks will need to have access to a growing universe of different ledgers to serve their own clients, further complicating their technical roadmaps. Earthport, in consultation with its clients, will grow the Hub to encompass different ledgers as needed, all available via a single Earthport API.”