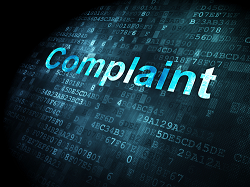 Deciphering how the CFPB handles consumer complaints—and ultimately decides to take action against a company—can be difficult. The bureau has come under fire for its public complaint database, which industry critics say relies too heavily on social media, unverified and duplicate claims. During a recent Webinar, Tristram Wolf, a Ballard Spahr associate and former CFPB attorney policy writer and investigator, joined colleagues in offering an inside look at the complaint process and tips for staying out of the CFPB’s crosshairs.

When a consumer submits a complaint online or through the call center, the CFPB asks for minimal information from the consumer, such as name, the company’s name and the nature of the complaint, according to Wolf. The companies then may respond by choosing a response category, such as “closed with explanation” or “closed without explanation.” Also, companies may and are expected to provide a response narrative depending on the response category they choose.

Consumers have the opportunity to dispute companies’ responses and may provide narratives to explain the reason for disputing. A certain number of complaints are chosen for in-depth evaluation, Wolf explained. Investigators are looking at how companies handle complaints, including whether companies briefly recite consumers’ complaints back to them, so consumers see that the companies understand the complaint and whether the companies provided a substantive response, including actions for every significant aspect of a complaint.

How should companies respond if a consumer’s complaints are completely inaccurate? Companies should try to provide a full factual history to make it clear what the source of the consumer’s main misunderstanding is,” said Wolf. “The consumer may not come to grips with the company’s representation of what took place, but it’s pretty likely that an investigator will. Investigators often are attempting to reconstruct the complaint. And when companies’ provide enough factual background—even if the consumer doesn’t quite get it—investigators will.

Another industry concern related to how the CFBP’s enforcement department analyzes complaints is an apparent lack of emphasis on the size of a company and its relative number of customers, according to Chris Willis, partner at Ballard Spahr, who has advised multiple financial services companies in conducting compliance reviews in anticipation of examinations by the CFPB. “We had a number of instances where a reasonably large number of [customers complained about issues] but that large number of people [might represent] something like 1/10 of 1 percent of the population of people who had that particular financial product,” Willis said. The bureau, however, doesn’t seem persuaded by the fact that it’s a very small incidence of this issue occurring, partly because the CFPB looks at raw numbers. If hundreds or a thousand people are affected, the agency doesn’t care if it’s 1/10 of 1 percent because it presumes there are X number of people who had the same problem but didn’t bother to complain, Willis added.