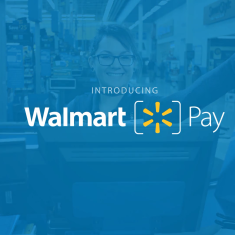 Big box retailer Walmart has joined the plethora of m-wallets already available to consumers with the addition of Walmart Pay. Walmart says the wallet, which is an added feature to its mobile app, makes shopping faster and easier for its customers, and analysts say the feature is likely to help Walmart create a tighter bond with customers.

Walmart Thursday introduced its proprietary m-wallet, which works on any iOS or Android smartphone that can download the Walmart app. The m-payment feature will be introduced in stores this month, with a nationwide rollout to be completed by the first half of next year, according to the company.

Customers can pay with the wallet by opening the app, choosing Walmart Pay and activating the camera. At any time during the checkout process, customers scan the QR code displayed at the register. When checkout is complete, customers receive an e-receipt. Paper receipts are not an option because “part of the simplicity” of using Walmart Pay is the ability to complete the entire transaction on the mobile phone, the retail giant said.

Walmart Pay may be linked to a customer’s credit, debit, prepaid or Walmart gift cards. “You also can set your preferences; for example, when you set up Walmart Pay, you might have three gift cards on file and you can set [Walmart Pay so] you will use your gift cards first before going to your credit card,” Danita Marquardt, a Walmart spokesperson, tells Paybefore.

If customers regularly start using Walmart’s mobile payments feature, the retailer will be in control of the entire purchasing experience from start to finish, even when new technologies are introduced, says Samee Zafar, a director in the London office of Edgar, Dunn & Co. A large company with a wide distribution footprint that can encourage customers to use their mobile apps ensure they are always the customer-facing brand, regardless of which credit or debit card, or any method, is used in the background, he adds.

Rick Oglesby, partner at Double Diamond Group, says the debut of Walmart Pay is an unsurprising move. “Retailers want tighter customer relationships and getting consumers to set up an account-on-file relationship is a great way to do that,” he says. “When a consumer enrolls a payment product with a merchant, the consumer is making a commitment to an ongoing relationship. Isn’t that a great thing for any retailer? Why would they want to have consumers enroll their payment vehicles with a third party?”

In October, Walmart joined Merchant Customer Exchange’s (MCX) CurrentC mobile payments pilot in Columbus, Ohio. MCX was founded in 2012 as a consortium of merchants and Walmart was one of the group’s earliest members, along with Target and Best Buy. Unlike Walmart Pay, which supports credit, debit and prepaid cards, CurrentC will support private-label cards, ACH, gift cards and Chase Pay.

“There are two different kinds of mobile wallets. You have one that is source-specific, which is about creating an experience in a store, as Walmart Pay is. There’s also the app that works across retail, which is similar to … the CurrentC mobile app,” Marquardt says. “Walmart Pay could potentially incorporate additional mobile wallets in the future,” she adds.

Walmart Pay has strong potential because Walmart already has a loyal, active base for its existing mobile app, with more than 20 million users, according to Greg Burch, Ingenico Group vice president, strategic initiatives, North America. “We think this move is less about competing with Apple Pay, Android Pay or CurrentC, and really about Walmart’s desire to create a seamless omnichannel experience for its customers,” he said.