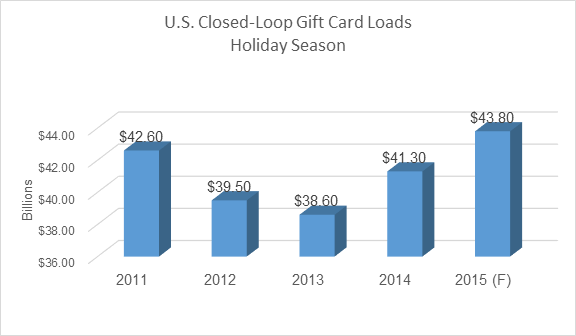 Closed-loop gift cards appear poised for growth for the second consecutive holiday season after 2012 and 2013 declines, thanks in part to last-minute shopping and young consumers, according to a new report from Mercator Advisory Group Inc.

The consultancy’s “2015 Closed-Loop Gift Card Holiday Forecast” estimates that gift card loads will hit $43.8 billion for the 2015 holiday shopping season, up 6 percent from $41.3 billion last year. The 2014 figure represents a 7 percent increase from $38.6 billion in 2013. Mercator defines the holiday shopping season as running from Nov. 1 through Dec. 31.

The Mercator report, written by Ben Jackson, director, prepaid advisory service, acknowledges signals that might suggest sluggish growth for holiday gift cards. For instance, a pre-holiday season survey conducted in October by the National Retail Federation trade group found that while 58.8 percent of respondents wanted gift cards for the holidays (that compares with 52.2 percent who said the same about clothes), the average consumer would spend nearly $20 less on gift cards this year compared with last year: $153.08 versus $172.74.

So what accounts for the Mercator optimism? Young consumers represent a main factor. “Kids who are not old enough to have credit or debit cards can use gift cards for online shopping, games and media,” the report notes. In fact, online shopping continues to make gains this holiday season. Web measurement firm comScore Inc., for instance, reports that online sales on Free Shipping Day—a Dec. 18 marketing push involving more than 1,000 merchants offering free shipping—increased 8 percent to about $847 million compared with the same promotion last year.

Other consumer surveys, including a PwC poll cited in the Mercator report, indicate that some of the youngest consumers—millennials—prefer “experiences to physical gifts, and are thus spending more of their money on travel and entertainment than are older demographics. This bodes well for gift card loads because a gift giver can’t wrap up an experience for the most part. However, gift cards for things like airlines, hotels, and restaurants can help fulfill the desire for experiences,” Jackson writes. “Additionally, open-loop gift cards can provide experiential help, and their loads will see a boost from this trend as well.”

Procrastination presents another plus for gift card loads, the report adds. That’s because digital gift cards give last-minute shoppers the chance to send presents without losing sleep over late deliveries. Mercator estimates that for the 2015 holiday shopping season, “digital card sales will range from 5 to 10 percent of total gift card loads, or $2.2 billion to $4.4 billion.”