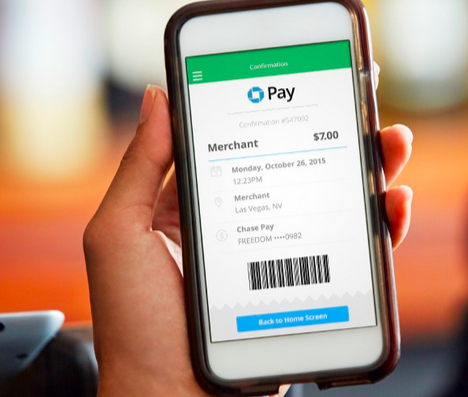 Chase is not the first U.S. bank to launch a mobile wallet—Capital One secured that position earlier this month. But Chase Pay has snagged a huge partner in MCX and, when launched next year, will create a major alternative network.

Gordon Smith, CEO of Consumer and Community Banking at Chase, yesterday unveiled the bank’s new mobile wallet Chase Pay at Money20/20 in Las Vegas. Chase Pay, which uses tokenization technology to enable online, in-store and in-app payments will not be in market until mid-2016. But when it launches, it will be accepted at MCX’s more than 100,000 member retail locations and in MCX’s CurrentC app.

“Scale is important,” said Smith, noting that one of every two U.S. households is a Chase customer. With 94 million credit, debit and prepaid card accounts in market and $707 billion in total sales in 2014, Chase also is tapping its digital user base—online and mobile banking users average 16 million logins daily.

Chase built Chase Pay, which will work on nearly all smartphones, to solve merchant concerns around middlemen between them and their customers, complex network rules, rising fraud costs and the fear of cyberthreats, according to Smith. Chase Pay will be integrated with merchant loyalty and rewards programs and the bank is partnering with 17 technology vendors to enable merchants that aren’t Chase Commerce Solutions clients to accept Chase Pay. Why would they want to?

Chase Pay offers fixed pricing, no additional fees, no network fees, no merchant processing fees and no merchant fraud liability. The mobile wallet also will preload 94 million accounts with customers’ names and addresses, Smith told attendees. “The only thing the customer has to do is accept the terms and conditions.”

Rick Oglesby, partner at Double Diamond Group, says Chase Pay has been a long-time coming. “Since February of 2013 when Chase licensed the Visa platform and formed Chase Merchant Services with a goal of working more directly with merchants, it became a natural MCX partner,” he notes. “Also, third-party mobile payment solutions, such as Apple Pay and Android Pay, aren’t the most attractive solutions for banks that prefer to have consumers work directly with them rather than via third-party intermediaries that not only collect tolls but also have the potential to usurp bank-to-consumer relationships.

“It’s a bold move for Chase to work with MCX, but a bold move may be needed to establish a mobile wallet foothold with consumers before they adopt third-party wallets,” Oglesby continues. “By partnering with MCX, Chase will gain support from the largest mobile-payments-accepting merchants promoting Chase Pay to consumers at the very moment consumers are making payment decisions. Due to its ability to promote right at the point-of-sale, MCX may be the single organization that is in the best position to drive consumer behavior toward mobile payment adoption.” The partnership, which could lead to banks competing for payment volume from members’ stores outside of the traditional payment network infrastructure is exactly what MCX wants, he adds. “Chase is large enough that it may be the catalyst that gets other banks participating in MCX, just as Apple was the catalyst to getting banks to participate in NFC solutions.”

Given the pricing model for merchants, Chase will see its card revenue decline but could charge for incentives merchants offer consumers, predicts Tim Sloane, vice president of payments innovation at Mercator Advisory Group. Sloane isn’t convinced Chase Pay’s reliance on QR codes for POS payments is the best option. “QR codes are slow and inconvenient for customers,” he says. Chase, which supports Apple Pay, may have a hard time convincing Apple Pay users to switch. And, the partnership with MCX doesn’t cover payments outside the U.S. “Chase still has work to do to be able to make this an infrastructure that consumers would adopt over traditional cards,” he adds.