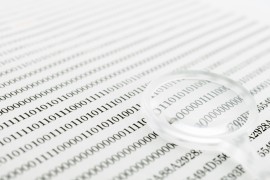 A lack of information in securities messages creates problems for financial institutions screening them for regulatory compliance. But if the audience in a session yesterday is representative, only around half of them are screening anyway.

Asked their plans for automatic scanning of securities messages during the Securities transparency: is this the next frontier? session yesterday, 52.4 per cent of the audience said they already do, 22.2 per cent said they planned to do so in the next 12 months and 25 per cent said they had no plans to do so.

Panellist James Freis, chief compliance officer at Deutsche Börse, said he was surprised. “Half of you haven’t considered it?” he asked the audience. “You might want to consider it before your next meeting with your regulator.”

Regulatory focus on screening for financial crime and sanctions compliance is shifting from payments to securities messages, putting the onus on financial institutions to ensure that they are checking these messages as well as payments.

“Sanctions authorities worldwide are worried that sanctioned entities could be hiding ownership,” said Freis, a former director of the US Treasury’s Financial Crimes Enforcement Network. “It’s not just financial sanctions – the securities industry is increasingly being used to look for things like tax evasion and market manipulation, which means not just looking at who, but also looking at what they are doing.”

Henrik Koch, global head of authentication and financial anti-crime at Nordea, said by volume, 40 per cent of Nordea’s traffic was securities messages. However, screening for regulatory compliance picked up very few cases because  “there just isn’t enough information in the message to be useful for sanctions screening”.

Olivier Goffard, head of group compliance and ethics at Euroclear, said institutions have to look across the chain of securities transactions and ownership to verify that others are applying the same due diligence.

Koch made a comparison with Swift’s MT202 (COV) payment message type introduced in 2009, which wrapped the payment message with other data that was carried through the chain. This enabled intermediaries to identify potentially illicit transactions.

The International Securities Services Association has developed a set of 17 financial crime compliance principles, a move generally welcomed by the panellists. Goffard said the principles set out how financial institutions should assist each other in ensuring that their due diligence requirements are met: “As soon as a custodian has any doubt about any assets or transaction they will be able to ask the counterparty for clarification,” he said.

Freis also welcomed the move, but said adoption would be the key: “It is one thing to create a technical format, it’s another to see if banks will use it or continue to use an opaque approach.”

Goffard said the principles “have not been built in a vacuum – there has been consultation with all of the main international regulators and their reactions have been very positive”.