It’s not who you know, it’s what you know 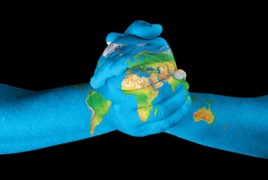 n July 2015, the New Development Bank Brics (NDB Brics) was formally launched. A multilateral development bank, it will be operated by Brazil, Russia, India, China and South Africa (Brics) as a complement to the existing US-dominated World Bank and International Monetary Fund (IMF). In a global economy where commodity prices have fallen and ‘recovery’ in developed countries is patchy and sluggish at best, NDB will be focused on the burgeoning ‘south-south’ trade flows.

The Shanghai-based Bank was set up “to foster greater financial and development cooperation among the five emerging markets”, says NDB. Together, the four original Bric countries comprised in 2014 more than 3 billion people (41.4 per cent of the world’s population), cover more than a quarter of the world’s land area over three continents and account for more than 25 per cent of global GDP.

The NDB agreement states: “The Bank shall mobilise resources for infrastructure and sustainable development projects in Brics and other emerging economies and developing countries, complementing the existing efforts of multilateral and regional financial institutions for global growth and development. To fulfil its purpose, the Bank shall support public or private projects through loans, guarantees, equity participation and other financial instruments. It shall also cooperate with international organisations and other financial entities and provide technical assistance for projects to be supported by the Bank.” Unlike the World Bank, which assigns votes based on capital share, NDB will operate on a one country, one vote basis. None of the countries will have veto power.

Each Brics member was expected to contribute an equal share in establishing start-up capital of $50 billion in the bank, with an ultimate goal of $100 billion. In addition to the NDB, the Brics states will also establish a reserve currency pool worth over another $100 billion. The paid-in reserves are planned to be denominated in each country’s currency. The Chinese renminbi is also expected to replace the US dollar at the Brics Bank, especially for projects in Asia.

The Brics bank is not the only manifestation of the shift of economic focus from west to east, or south to south. Other initiatives include the Shanghai Cooperation Organisation (SCO), an intergovernmental organisation founded in Shanghai in June 2001 by six countries: China, Kazakhstan, Kyrgyz Republic, Russia, Tajikistan and Uzbekistan. Among the main objectives of the SCO are to promote cooperation in political affairs, economics and trade, scientific-technical, cultural and educational spheres as well as in energy, transportation, tourism and environmental protection.

Despite the mainstream media panic about a China ‘crash’, growth rates in the Brics and other emerging economies are still healthy, particularly when compared to Western nations. At the Asia Securities Industry and Financial Markets Association conference in Singapore last November, deputy managing director of the Monetary Authority of Singapore, Jacqueline Loh, said Asia remained the fastest growing and most dynamic region in the world today and is likely to remain so in the foreseeable future. Citing projections by research organisation The Conference Board, she said China’s growth in the next ten years will average close to 5 per cent per annum, with India at about 4.2 per cent and the rest of Asia at 4.5 per cent. “These projected growth rates for Asia are well above the 3.8 per cent for emerging economies as a whole and the 1.7 per cent expected for the advanced economies over the same period,” she said. “Looking further into the future, the Asian Development Bank has projected that the sum of the GDP of China, India and Asean in purchasing power parity terms could quadruple by 2030 and even exceed that of the US and Europe combined.”

Loh said “positive factors” such as Asia’s large middle class sector would fuel growth in the demand for financial services in the region. “Today, five of the top ten largest banks in the world by market capitalisation are Asian banks,” she said. “Primary market capital-raising in Asia via IPOs is the highest in the world. In the debt market, capital raised via Asian bond issuances have also doubled since 2009 after having achieved record sales in each of the past three years.”

While the changing growth rates and alternative banking and finance initiatives are often characterised as a ‘shift in economic power’, Vinod Madhavan head, transactional products and services, South Africa at Standard Bank Group, says they reflect the increased trade and economic activity between countries in the south – both developing and developed. This trend will continue because “even in these difficult economic times, countries in sub-Saharan Africa continue to grow their GDP at an average of 5 per cent”.

Madhavan Ramaswamy, head of correspondent banking at Standard Chartered agrees. “Within the Asian region we are seeing increasing trade between the countries.” Growing trade corridors include China-Vietnam, Vietnam-Indonesia and China-Africa. Such growth is being strongly promoted by governments and development agencies in the region.

Both Madhavan and Ramaswamy unsurprisingly see opportunities in this south-south intra-regional growth for banks that have experience dealing with emerging economies. Says Madhavan: “Financial institutions that deal with emerging markets need to have a different risk appetite from their counterparts in more developed regions. We are strong in trade finance and while nearly every bank provides these capabilities, regional banks can combine these products with the right risk appetite. You need both.”

Intra-regional trade is an area in which regional banks can play particularly strongly. If a comnpany in Vietnam does business with another company in China, it is likely a regional bank will have the local expertise and knowledge to support such a deal. However, if the same Vietnamese company wishes to trade with a company in Peru, the regional bank could find itself out of its depth.

Another important trend in the region, says Madhavan, is the desire for local consumers to buy locally produced goods. He says this trend, which is occurring in China, India and across Africa is likely to continue. “Increasingly, manufacturing undertaken in these countries will be consumed in these countries. This is called the localisation of the supply chain and it is a big growth area for domestic companies.”

This localisation trend requires strong local expertise on the part of financial institutions, he adds. Standard Bank intends to “go deeper” into its home markets in Africa, rather than pursuing new markets elsewhere, he says. “When corporates come into new markets such as Africa, they are looking for banks with local expertise.”

In parallel to this localisation development, there are also changes in terms of currency. Ramaswamy says around 80-85 per cent of global trade transactions are denominated in USD today but as intra-regional trades grows in the south, countries may opt to deal with each other’s currencies. While he says it is “early days”, he believes that eventually one of the local currencies in the south will emerge as an active trade currency for the region (potentially China’s renminbi). The ability to provide liquidity in many currencies, says Ramaswamy, will therefore become an important differentiator for financial institutions serving the growth economies.

Any delegate walking around Singapore will realise it is not a developing country, but it provides a clear illustration of how quickly a country can build its economy and flourish. Singapore is a member of the Association of South East Asian Nations (Asean) along with Brunei Darussalam, Cambodia, Indonesia, Laos, Malaysia, Myanmar, Philippines, Thailand and Vietnam. Established in 1967 among its many aims is the acceleration of economic growth.

The Association is pursuing a number of initiatives to promote greater integration of Asia’s capital markets and financial services. For example, it is in discussions to complete a banking integration framework that will allow qualified Asean banks to progressively expand in each other’s jurisdictions. This initiative aims to create opportunities to strengthen regional banks in Asean and improve banking services.

In the debt markets, Asean securities regulators have implemented common disclosure standards, which will enable issuers to issue debt securities across various Asean markets with a single prospectus. Under this scheme, the time required to issue in multiple markets will be the same as that for issuing in one market, reaping both cost and time savings for issuers.

“The strong growth of Asian economies and financial markets has created the need for greater financial integration in the Asean region,” says Shrinath Bolloju, managing director, head of institutional cash and securities services, Asia Pacific at Deutsche Bank. Asean-wide economic growth averaged 5.6 per cent per annum from 2010 to 2014 and intra-Asean trade has almost quadrupled since 2000, signifying tremendous development and potential in trade activities, he adds. “However, such rapid trade expansion has not been matched by a commensurate increase in the degree of financial integration. To generate a market with sufficient size, scale and liquidity that can compete with the powerhouses of China and India, closer integration of Asean economies is vital.”

Bolloju says integration would introduce a range of benefits, including reduced complexity for financial institutions operating across Asean markets. “In the long run, positive impacts such as reduced legal risks arising from harmonised regulations, lower operating costs, and enhanced scalability, can be expected,” he says.