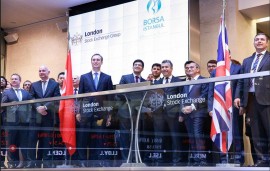 Representatives of Borsa Istanbul at the market open at the LSE, 11 September 2015

The launch of Turkish derivatives on the London Stock Exchange market represents part of the exchange’s long-cherished goal of growing its international derivatives business, and vindicates its ‘open access’ policy, it  says.

A deal between Turkey’s Borsa İstanbuland the LSE means that  futures and options on the BIST 30 index, which lists Turkey’s top companies, can be traded through the LSE from 14 September. The deal means that Turkish equity index derivatives will be available to any member of the LSE.

Cécile Nagel, global head of equities, LCH.Clearnet, said that it will also be possible to clear the transactions via LCH.Clearnet. But the real context of the deal is that it is part of a wider plan, long-held, to grow out the LSE Group’s derivatives business. “This [is] part of our commitment to expand our derivatives offering in partnership with trading venues,” she said.

The Turkish market is interesting, said Nagel, because the BIST 30 Index futures currently trade on average more than 180,000 contracts per day on the Borsa İstanbul derivatives market. That makes it an interesting proposition for investors looking to diversify their portfolios and gain access to one of the more interesting and dynamic markets in the region.

From the Turkish perspective, making the index available in London will help to gain visibility for Turkey as an investment destination and to attract new flows. According to Çetin Ali Dönmez, executive vice president at Borsa İstanbul, trading the BIST 30 Index futures and options on two different venues will boost total liquidity at both exchanges.

“Reaching the global network of investors via LSEG is an important milestone for us in our strategic vision of strengthening the international position of Turkey in the global economy,” said Dönmez. “This partnership enables us to expand our product offering and increases global investor base exposure. It allows easier access to the most dynamic and emerging economy of the region, in a cost efficient way thus giving investors an opportunity to diversify their portfolios.”

There is also a technology side to the deal, according to Muammer Cakir, head of derivatives, Borsa İstanbul. Cakir pointed out that trading and clearing at the LSE will offer clients more opportunities to achieve operational and collateral efficiencies. That could be useful, given that the global securities markets are facing a relative scarcity of high-quality collateral due to regulatory pressures that require more collateral to be set aside by financial institutions.

“Listing BIST 30 Index derivatives at LSEDM will give us well-deserved visibility on a global scale,” added Cakir. “Additionally, Ability to access Turkish products in a single platform will also attract a new class of investors for Turkey, creating a virtuous cycle benefiting both markets.”

Turkey has seen some interesting developments in its capital markets in recent years. In November 2014, European trading venue BATS Chi-X Europe expanded its operations into the country, marking the first time a competitor has ever entered the Turkish market to take on Borsa Istanbul. In the longer term, Turkey has reformed its capital markets law over the last few years and has adopted the European Union’s MiFID standards and definitions, including recognition for multilateral trading facilities.

In addition to these factors, there is also the bilateral relationship between the UK and the Republic of Turkey. At a event held in London on 11 September in anticipation of the launch, Abdurrahman Bilgiç, the Turkish Ambassador to the UK attended, along with Cakir and Dönmez from Borsa Istanbul. For the ambassador, the deal wasn’t just about linking the two stock markets, but also about creating a bond between the UK and Turkish financial centres, which would held Istanbul reach its own goal, which is to become an international financial hub.

“This partnership agreement is wide ranging and is designed not to just link the two stock markets but to create a lasting bond between the UK and Turkish financial centres – helping Istanbul to grow as an international financial hub,” he said. “Indeed, positive developments in the Turkish economy in the last decade have brought Turkey and Istanbul to the forefront. Also, Turkey assumed the G-20 presidency this year. Today will be another milestone in our economic and financial relations and will add more meaning to Borsa Istanbul’s motto: ‘regional hub, global actor’.”