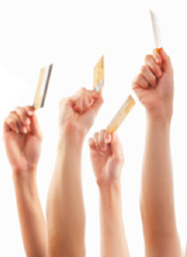 Global smart card production has doubled in the last 36 months, in part, because of the U.S. migration to EMV this year. And instead of displacing physical cards, new mobile wallets—including Apple Pay—are contributing to higher overall card production rates, according to Europe’s Smart Payment Association (SPA).

The Munich-based organization, which represents major smart card manufacturers, says the U.S. shift to EMV is helping to reignite hope that NFC and contactless payments technology—introduced a decade ago in the U.S.—will finally catch on broadly. “The liability shift [in the U.S.] offers a very exciting opportunity for NFC and contactless payment,” Nicolas Raffin, SPA president, said in a letter to members this week. U.S. merchants refreshing POS hardware to accept EMV cards invariably gain the capability to process NFC transactions, which may help encourage more financial institutions to issue contactless physical cards, Raffin suggests. Worldwide shipments of contactless, dual-interface physical cards have increased significantly over the last year, he notes.

The emergence of new m-payments services also are heightening consumer interest in contactless payments, according to Raffin. “Apple Pay, Samsung Pay and others are certainly at low volume at present, but they’ve brought the ‘cool’ factor to the concept of contactless payment,” he says. Interestingly, as consumers gradually adopt these m-payments services, production of physical cards also is rising, because each relies on the user’s core account relationship with a financial institution, which includes a physical card, the SPA reports. Though m-payments may eventually replace physical cards in consumers’ daily payments routines, m-payments would need to reach 100 percent penetration to completely supplant physical cards, which the SPA believes is unlikely to occur for many years.

Stay tuned to learn more about why plastic cards still matter in the Fall issue of Pay Magazine, out next month. Click here to read the Spring issue.