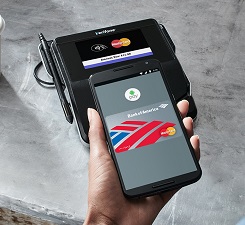 MasterCard this week launched Digital Enablement Express to expedite the process of digitizing and tokenizing MasterCard accounts through its digital enablement service. With MasterCard’s Digital Enablement Express, MasterCard partners, such as digital wallet providers, device manufacturers, card-on-file merchants and other digital payment providers, have a simple onboarding process to engage with all participating banks. As a result, providers are able to deliver to consumers new services more quickly and at scale, according to the payments network.

Capital One, Fifth Third Bank and KeyBank are among the first issuers to support Express. Samsung announced it would be participating in the program, giving issuers the immediate ability to participate in Samsung Pay and enabling Samsung to bring secure mobile payments to consumers more quickly. Google also announced its participation, enabling it to accelerate consumer access to Android Pay.

The program makes it easier for digital wallet providers and banks to work together efficiently, according to Rick Oglesby, research director for Double Diamond Group.

“Rather than forcing digital wallet providers to do individual deals with each bank, the wallets can just deal with MasterCard, who serves as a single technological and business interface with its issuers using standard terms and conditions,” he tells Paybefore. “It helps to accelerate deployment of mobile wallets that have broad bank participation, which increases the pool of potential users.”

Oglesby adds that MasterCard’s launch of Express was expected because it needed something to similar to Visa’s Digital Enablement Program [VDEP], ensuring that MasterCard’s banks have the same ease of wallet integration options that Visa’s issuers have.

“On the downside, this offering does make it harder for wallet providers to monetize their products since it standardizes terms and conditions across banks and, like VDEP, Express doesn’t provide for fee collection between issuers and wallet providers, a service that is provided for Apple Pay but will not be provided to other wallet providers going forward,” Oglesby says.