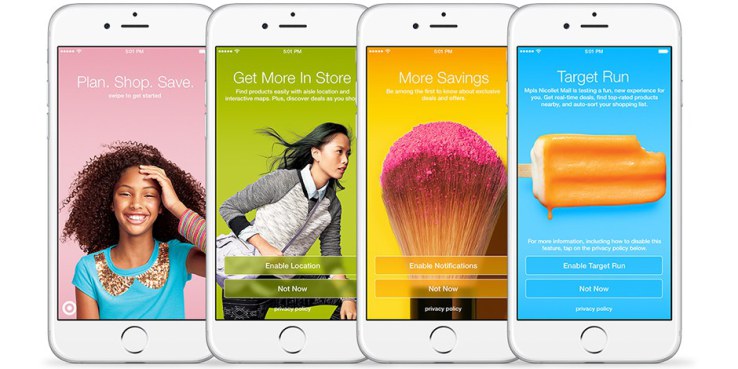 Target is tackling showrooming and hopes to increase shopper engagement with its latest test of location-based beacon technology in 50 of its stores in Chicago, Denver, Minneapolis, New York City, Pittsburgh, Portland, Ore., San Francisco and Seattle. The feature works through Target’s iPhone app (with Android app support coming soon) and sends push notifications to shoppers via Bluetooth, based on their locations within a store. For instance, when in the baby department, a shopper might receive product recommendations from Target’s BabyCenter. Users also will be notified of relevant deals and special offers. Target says it will limit push notifications to two per store visit to avoid overwhelming shoppers. The retail giant said it’s working on additional features, including the ability to summon a store team member for assistance and will use results and guest feedback from the pilot to further hone the service before a nationwide rollout, planned for later this year.

Target is the latest major U.S. retailer to explore the use of Bluetooth low energy (BLE) mobile beacons, which many observers view as a promising customer engagement tool that can help personalize the in-store shopping experience, combat the “showrooming” dilemma and give merchants access to valuable shopper data. Apple, Macy’s and Lord & Taylor are among the retailers that have tested in-store beacons over the past year. Customers thus far seem to be relatively accepting of such services, with nearly three-quarters of respondents in a November 2014 poll by Swirl reporting that beacons increased their likelihood of making a purchase while in-store.