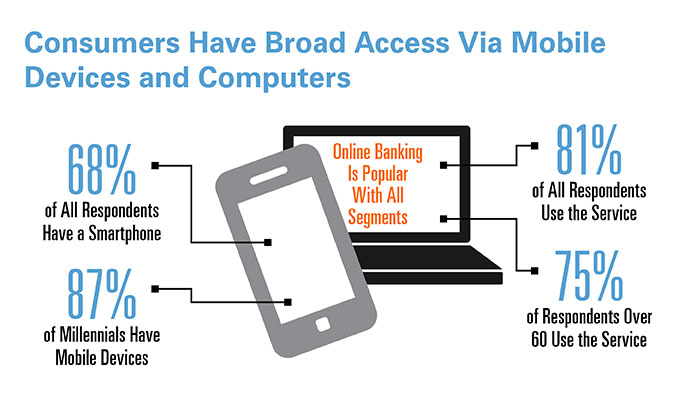 To compete in a mobile world, financial services providers must focus on speed, convenience and security when designing mobile banking and payments services, according to a new report. Fiserv’s 13th Annual Consumer Trends Survey canvassed 4,000 U.S. consumers 18 and older to gain insight into their mobile and online banking experiences and attitudes. The latest report reveals just how far mobile banking has advanced since the inaugural survey in 2002—when using a smartphone to manage accounts or pay bills wasn’t even an option. Now, 35 million U.S. households bank from their mobile phones. Between 2013 and 2014, mobile banking adoption jumped 17 percent. Those gains were driven largely by greater access to mobile devices. Sixty-eight percent of respondents—including 87 percent of millennials—report having a smartphone or tablet. Of those consumers, 48 percent use mobile banking services, including transfers between multiple accounts, balance information, mobile check deposit, bill pay and money transfer

There’s plenty of room for continued growth in mobile banking, Fiserv said. Expanded mobile capabilities, continued penetration of smartphones and tablets, and the development of wearable technologies should contribute to “equally dramatic” changes over the next decade. But to capitalize on those advances, financial institutions must focus on what consumers value most—speed and security. Same-day posting of online and mobile transactions was the most-desired enhancement among survey respondents, along with same-day posting of e-bill payments. Security was also a major concern, with 52 percent of those who said they were not interested in mobile banking citing security concerns as the primary reason why. To overcome those fears, it’s incumbent upon providers to educate consumers on existing security measures and continue efforts to enhance security even further, Fiserv said.