Is merging innovative financial technology with credit unions the key to banking the unbanked in Latin America? 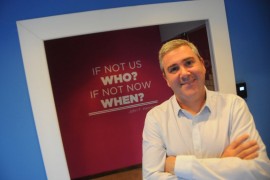 Credit unions play a critical role in local economies of countries throughout Latin America and the Caribbean, serving as a vital savings and credit conduit to vast numbers of people, especially those in the lower rungs of the income pyramid who are in many cases, priced out of the traditional banking system, writes Martin Naor

These organizations, created with the primary purpose of encouraging people of ordinary means to save money while offering them loans, are able to charge lower rates for loans (as well as pay higher dividends on savings) because they are nonprofit cooperatives. Rather than paying profits to stockholders, credit unions return earnings to members in the form of dividends or improved services.

With lower cost structures, they are in a better position to provide millions of unbanked Latin Americans with access to financial services that can have a transformative effect on the social and economic development of nations. This is a particularly important function in a region where the population, according to McKinsey Consulting, remains 65 percent unbanked.

Despite the benefits credit unions provide to large segments of the population, the fact remains that these not-for-profit organisations simply lack the resources necessary to significantly alleviate the exorbitantly high rate of unbanked throughout the region.

So the question becomes, what can these institutions do to increase the effectiveness, efficiency and reach of their vital products and services?

Credit Unions, and small banks for that matter, face the same issue as larger banks in that consumers of all kinds are beginning to solidify the digital user experience they expect from all of their service providers, including financial services. As platforms such as Facebook become more and more accessible to individuals in all social and economic levels of society coupled with the exploding penetration of smart phones, which is forecasted to total 219.9 million users by 2018, these users will begin to increasingly demand the same convenience and intuitive ease of use in their financial services.

Fortunately, technology today allows for credit unions and small banks to deploy platforms that provide their customers with exceptional capabilities to not only meet their banking needs, but to do so in the mobile and user-friendly manner they want and expect.

Adding to the hurdles faced by credit unions in the region, governments and regulators are adding restrictions that require these institutions to only provide differentiated services to specifically defined market segments through channels not served by traditional branch banking infrastructures.

Finally, with the proliferation of cyber crime, building secure infrastructures that protect the identities of customers is of paramount importance to every single financial services stakeholder.

Throughout the world, a surge in venture capital investment into financial innovation has created exciting new business models that are poised to effectively and efficiently transform the financial services industry.

Last year, according to Accenture, the financial technology industry attracted over US$12 billion in venture capital investment in 2014, fueling the creative innovations in the uses of analytics to evaluate, approve and process financial transactions that are greatly expanding the access to once prohibitively expensive and cumbersome financial services for individuals of ordinary means and small and medium sized enterprises (SMEs).

Much of the changes in the market paradigm for financial services are being driven by the proliferation of mobile phones, especially the Smartphone, which is essentially providing supercomputing power to consumers all over the world. Companies such as M-Pesa, Lenddo, Abra and Konfio are just a few of the thousands of new companies transforming the financial landscape by making world-class financial services available to the masses.

However, systematically scaling and bringing these solutions to large numbers of people remains one of the most daunting challenges for even the most well funded startups. The ability to partner and collaborate with large institutions that have established customer bases and reach into communities could be a massive “win-win” for both the startups and the credit unions. This obviously complimentary collaboration has one wrinkle. Most credit unions operate on antiquated technology frameworks that inhibit, if not outright prevent, the onboarding of technologically agile startup solutions onto their core-banking platforms.

Adding to the challenge is the fact that as non-profits, credit unions lack the time, human resources and budgets to invest in updating their technology platforms. Until now, there had been limited options as most core-banking technology companies focused their products on larger bank infrastructures, pricing many smaller players out of the market and putting them in competitively vulnerable positions of not being able to offer state-of-the-art solutions.

One of the most disruptive aspects of the innovations in fintech are the ability to provide financial services quickly and inexpensively.

The big banks, by in large, have the financial and technological ability, if not necessarily the will and desire, to compete for the unbanked population. If the credit unions and smaller banks do not prepare a strategy to engage in the competition for this huge, untapped market, they may find themselves ultimately outside looking in as their market share decreases.

The other “elephant in the room” is the coming era of Millennials. Today, there are 160 million in Latin America, representing roughly 30 percent of the entire population of the region. These digital natives being raised on social media are a critical market segment for institutions both big and small which must be addressed through smart technology.

So what is the solution? As technology becomes faster, cheaper and more accessible, it allows for the creation of affordable state-of-the-art, digitally agile solutions that can allow credit unions and small banks to operate with the speed, security and sophistication of large, global financial institutions. This enhanced technology capability coupled with the localized understanding of under and unbanked market segments can help credit unions continue to be a critical financial link for millions of consumers.

About Bankingly: US-based Bankingly has created an electronic channels solution that allows financial institutions to provide their clients world-class electronic services, with the agility and the security needed, at a variable and reasonable cost. With Bankingly’s robust digital banking platform, both credit unions and small banks throughout Latin America and the Caribbean now have access to a World-class technology capabilities that will allow them to meet the challenges and obstacles faced by the industry while providing their customers with the user experience they want and expect. Armed with the technological capabilities offered by Bankingly, credit unions will be able to strengthen and expand their vital financial services to help them increase revenue, strengthen customer loyalty and engagement while helping to lower the rate of the unbanked in the region.