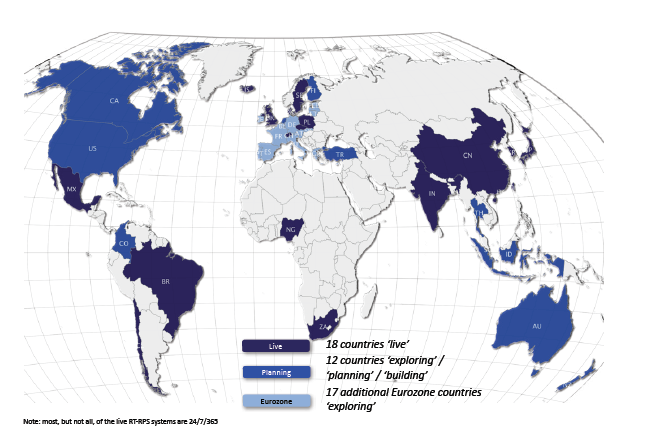 Global payments stakeholders, including regulators, are getting behind ISO 20022 as the standard that  eventually could enable interoperable real-time, cross-border payments. On Aug. 10 an industry group published a draft set of core payments messages to accompany ISO 20022 transactions. Made up of more than 50 global experts and facilitated by the trade group Payments UK, the ISO Real-Time Payments Group (RTPG) is inviting industry comment on the proposal.

“Constant engagement with the industry is needed to understand the use cases for ISO 20022 in the real-time retail space to make the work as future-proof as possible,” according to the latest issue of the ISO 20022 newsletter.

Eighteen countries are live with real-time payments and 12 countries—including the U.S. and Canada—are exploring, planning and building systems, while an additional 17 countries are exploring real-time payments through a pan-Eurozone initiative, according to the industry group. Italy will require use of ISO 20022 for corporate-to-bank communications as of early 2016. Comments may be submitted to Lauren Jones, head of standards at Payments UK, [email protected]. The group will be meeting again at SIBOS Singapore on Oct. 12-15, to update the wider industry on progress.

In related news, the Canadian Payments Association (CPA) also announced a public consultation on the introduction of the new messaging standard for ISO 20022.

At the end of July, the Federal Reserve established its Faster Payments Task Force with the mission of identifying and evaluating alternative approaches for implementing faster payments capabilities in the U.S. Meanwhile, the CFPB is urging any new payments infrastructure in the U.S. to have built-in consumer protections.