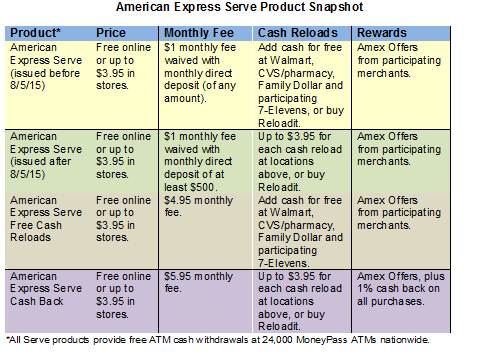 Consumer research showing that the Serve brand appeals to customers with different needs led to the new product features and pricing, Stefan Happ, chief commercial officer, Enterprise Growth, American Express, tells Paybefore. “We’re addressing the needs of different customers by giving cash back to people who were looking for rewards from their existing debit card providers who aren’t providing [them] anymore and free cash reloads to people with that requirement, who aren’t [necessarily] the everyday debit card user,” he explains. Serve will continue to provide its merchant-funded Amex Offers to all Serve cardholders, he notes.

American Express expects to see solid demand for the new Serve Cash Back product among core users, who tend to skew younger—44 percent are under age 35—and about 53 percent female, Happ says. “Our research shows people respond positively to rewards and incentives, and suggests cash back will be popular.” The Cash Back rewards are deposited into cardholders’ accounts immediately or up to 60 days after the purchase, American Express says. Cardholders with the cash-back feature would need to spend about $400 monthly to break even on the monthly fee. Those who spend at least $42,000 annually on purchases could earn more than $400 annually in rewards, according to American Express.

Serve has caught on well with consumers, who loaded $7 billion since the brand was introduced, with load volume growing 300 percent between 2012 and 2014, Happ adds. American Express also continues to offer its Bluebird card at Walmart stores, positioned as a bank account alternative, though its fees and features are slightly different than Serve. There is no monthly fee and Bluebird cardholders receive different merchant-funded offers based on its agreement with Walmart, Happ says.

Adding rewards to Serve may be “a wake-up call” for the GPR industry, Madeline Aufseeser, a senior analyst with Aite Group, tells Paybefore. “This product will likely have strong appeal to millennials, who are looking for banking products with few requirements and commitments,” she notes. It’s even possible Serve Cash Back will lure some customers away from traditional bank accounts, she suggests. “Rewards plus no minimum balance requirement makes the $5.95 fee affordable for a lot of consumers,” Aufseeser adds.

Serve isn’t the first to offer GPR cardholders incentives and rewards. NetSpend in 2012 introduced NetSpend Payback Rewards, giving consumers cash back for purchases at certain merchants based on shopping patterns. “The card-linked offers model has been around, and it’s very different than rewarding people for every purchase,” Aufseeser observes. “With its cash-back offer, Serve is giving cardholders a reason to hold on to the card and drive its usage, which is the key to revenues and profits.”