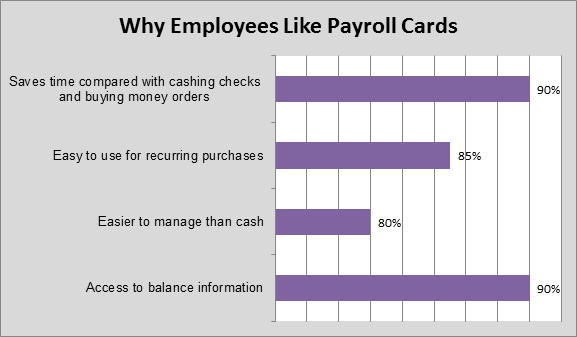 Payroll cards have gotten a lot of negative press in the past few years and have been (or still are) in the legislative and regulatory hot seat in a few states, where onerous regulations could drive products out of the market. Amid this turmoil, Visa went directly to employees who use payroll cards to get their perspectives. What the survey found is that end users appreciate the benefits of payroll cards, including easy access to funds and the ability to better manage their personal finances.

The “Visa Payroll Card Users Survey” asked cardholders about their views on the cards in comparison to paper checks. Respondents highlighted several benefits of payroll cards, including:

Survey results are based on an online survey by Ipsos as a commissioned agent of Visa, among active cardholders of four Visa payroll partners, including ADP. Data weighted to each partner’s respective share of more than half of Visa’s payroll card POS dollar volume from October 2013 to September 2014.