Banks notable by their absence at Apple Pay UK launch 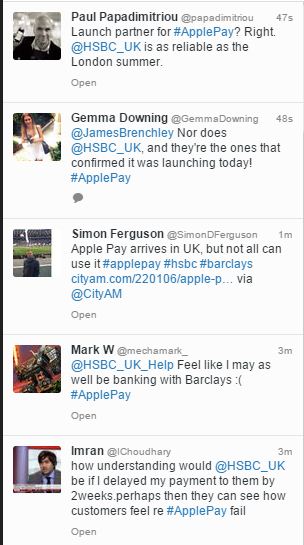 HSBC customers took to social media to air their disappointment

Apple Pay launched in the UK without the participation of most of the major banks, including HSBC, which was listed as a launch partner, but this morning faced customers taking to social media to complain that they can’t use the app.

The bank responded that it would let its customers know when the bank is ready, expected to be later this month.

Barclays had always planned to join later, along with Lloyds and its Halifax and Bank of Scotland subsidiaries, M&S Bank and TSB.

RBS and its Natwest and Ulster Bank subsidiaries, MBNA, Nationwide and Santander customers will be able to load their cards and use Apple Pay starting today, as will American Express, MasterCard and Visa credit card holders.

Apple Pay is an app that allows customers with an Apple iPhone 6, iPhone 6 Plus or Apple Watch to make contactless payments for items under £20 at launch (due to be increased to £30 this autumn). Apple says that at launch, 250,000 locations will accept Apple Pay, including Boots , BP, Costa Coffee, Dune, JD Sports, KFC , Liberty, Lidl, Marks & Spencer, McDonald’s , Nando’s, New Look, Post Office, Pret A Manger, Spar, Starbucks, Subway, Wagamama and Waitrose.

To use Apple Pay, the customer registers their debit card or credit card on the app. The service supports American Express, MasterCard and Visa Europe cards. For security, when adding a credit or debit card, the actual card numbers are not stored on the device, nor on Apple servers. Instead, a unique Device Account Number is assigned, encrypted and securely stored in the Secure Element on the customer’s device, and each transaction is authorised with a one-time unique dynamic security code.

Supporters of Apple Pay argue that it will contribute to the UK’s position as a relatively advanced payments market. There are an estimated 400,000 contactless payment terminals in the UK in total. UK consumers have become used to paying with contactless cards through Transport for London’s Oyster card scheme on London underground and overground trains and buses, which was later expanded to allow payment directly via contactless debit cards. Earlier this month, Visa Europe reported more than one billion transactions made in the UK last year, while Visa cardholders spent €1.6 billion in March 2015 alone.

“Innovation in UK payments means it’s fast becoming the most advanced market in the world and the arrival of Apple Pay heralds this new era,” said Mark Barnett, president of MasterCard UK & Ireland. “We will see more change in the next five years than we’ve seen in the last 50, bringing even more convenience and security for consumers.”

However, opinion remains divided over the significance of the Apple Pay launch in terms of its effect on banks. Some observers suggest that it is a harbinger of impending disintermediation by newer, quicker firms. For example, Jes Breslaw, director of strategy at data company Delphix, said: “That Apple and Google have been the ones to crack mobile payments is indicative of the upheaval happening within the banking industry. Digital giants are moving fast to innovate and usurp the monetary capabilities previously seen as the preserve of big banks. It begs the question, what next? Apple bank? Google Loans? Amazon Insurance? In contrast, big banks risk finishing last in the race for the mobile wallet as they battle complex legacy systems, inadequate development environments, old methodologies and poor non-production data.”

Others went further, describing the launch as a ‘watershed moment’ in UK payments and arguing that as consumers become familiar with using phone devices to make purchases, we will probably see a plateau in the issuance of plastic cards in the next few years, followed by a long but inevitable decline of cards into obscurity.

According to Lu Zurawski, head of consumer payments EMEA at global payments company ACI Worldwide: “The implications for UK banks are manifold: banks that move quickly to adopt Apple Pay will need to carefully consider the economics of this new scheme and how to accommodate other alternatives too, e.g. Samsung Pay, Android Pay or the Zapp platform. Behind the scenes, bankers are trying to work out how to stitch together all these new payments operations, whilst offering their consumers an overall, easy to use service.”

Initial casual experiments with Apple Pay in the Banking Technology offices found the process of registering a card from one of the active issuers straightforward: the first, an American  credit card, was already the payment mechanism on the iTunes account for the iPhone 6 we used, so became the default card in the Passbook app (not renamed as Wallet, at least yet).

Next up, an HSBC Visa debit, Barclaycard credit card and Lloyds-issued MasterCard credit card all failed as expected – but with surprisingly different terms and conditions to agree to, and different error messages: the first two elicited a curt “contact your card issuer” while the Lloyds MasterCard got “your issuer does not yet support Apple Pay”.

A NatWest Visa debit card, however, sailed through. Scanning the card with the camera’s phone was almost perfect, and easy to correct, before gong to the next step, which was a text message to the cardholder from NatWest confirming the ownership of card, phone and account.

Less clear, and disappointing for Londoners, is how to get an Oyster card into the Passbook/Wallet. Several attempts to navigate the TfL website were abandoned, largely as the realisation dawned that since there is already a contactless  payment card in there, the Oyster Card is only worth registering for season ticket/travelcard holders.

Zurawski also raised the issue of whether Apple’s business model will work in Europe: “In the US, banks were willing to pay 0.15% per transaction to Apple for the privilege of using Apple’s platform. That’s not a stretch when US issuers receive a hefty ‘interchange’ income (paid ultimately by merchants) every time one of their cards is used. But in Europe, interchange fees are being regulated almost out of existence, currently capped at 0.3%. Therefore, the model only works if Apple’s fees for the UK will not be so high as in the US. European interoperability will be key to the long term success of mobile payments and Apple Pay.”

“Hacking is an increasingly common occurrence and, if as expected Apple Pay is wildly successful in the UK, it will not only paint a huge bulls-eye on Apple but also on mobile devices generally,” he said. “By having so much personal information concentrated on our mobiles – social media profiles, email accounts, apps and now, payment information – the damage that criminals can do with access to our phones is terrifying to think about. We have to question whether our data is safe enough on our mobiles.”

Others highlighted the way the launch of Apple Pay fits into the deeper debate over ‘software vs hardware-based security.’ Winston Bond, technical director at Arxan Technologies pointed out that Apple Pay’s hardware-based approach has for a long time been viewed as stronger in terms of security. On the other hand, it is seen as restrictive and could offer little incentive to merchants due to the proprietary nature of Apple.

“However, the software-based Host Card Emulation approach found in Android Pay is close on its heels,” said Bond. “We have seen advancements with the HCE approach come a long way in recent times, as it achieves a similar level of security protection as hardware-based, and offers additional advantages of speed and agility. In fact, with Android platform global adoption at least 4 times greater than iOS, the probability of success in defining a mobile payment ecosystem with mass adoption and greater longevity resides in the software-based approach’s favour – as long as certain security precautions, such as tamper-proofing software and white-box cryptography found with HCE, are taken.”