Viewpoint: Why Banks Still May Be Nervous about Banking Nonbank Money Services Businesses

Just when banks thought it might be safe to dip their toe back into the business of servicing MSBs, the FDIC has chosen to publicize a DOJ indictment that again focuses on the risk of doing business with MSBs. What message does the FDIC mean to communicate by highlighting an indictment that appears to be a clear case of old-fashioned fraud?

On May 26, 2015, the FDIC Office of Inspector General (OIG) posted a Press Release Update from the DOJ regarding a federal grand jury indictment, handed down on May 20, charging Jack Weichman with various counts of bank fraud, bankruptcy fraud, money laundering, wire fraud and filing false income tax returns. According to the indictment, Weichman operated a medical billing firm (Medical Management and Data Services or MMDS), which provided physicians and physician groups with standard back-office professional services, such as administering billing, payroll, tax payment and similar services. 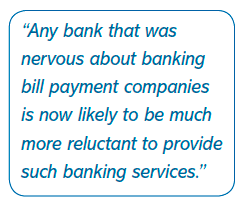 This indictment was not an FDIC enforcement action; in fact, it was a standard fraud claim brought by the Department of Justice in Indiana. But the FDIC clearly chose to publicize the action on its Website and via email to its online subscribers to call attention to the risks arising from bank relationships with bill payment entities, such as Weichman’s MMDS. Any bank that was nervous about banking bill payment companies is now likely to be much more reluctant to provide such banking services.

Unfortunately, the indictment provides little detail on the underlying facts, but one can connect the dots:

The indictment alleges that Weichman used this access to fraudulently transfer more than $3 million from his clients’ accounts and fraudulently renewed a $350,000 term loan of another client. According to the indictment, large amounts of funds were moved between two physician accounts held at the same bank. The funds moved from one physician’s account to the other’s and then to Weichman’s through the issuance of a cashier’s check payable to himself.

If these allegations are true, they clearly involve fraudulent acts of the old-fashioned variety. Fraud by accountants or financial advisors has occurred for ages. (Indeed, many a Dickensian villain was crooked in similar ways.) The issue is: When the FDIC chooses to broadcast this indictment, it appears—given the times we’re in—that the agency is saying more. Perhaps we’re being sensitive or even overly sensitive to nuances, but, to us, the implication is the FDIC is, once again, reminding its member banks they are at risk when they provide banking services to bill payment companies and other nonbank financial service companies, particularly money transmitters.

Moreover, because the FDIC posting failed to offer any insights or guidance on how these fraud losses occurred or could have been prevented, the message might be read that the risk arises simply by virtue of banking these companies. We hope that that is not the case.

It’s well known that it’s already difficult for many nonbank financial service companies to find a banking relationship. Our concern is that firing this warning shot—without context or guidance—could discourage banks from doing business with money transmitters and other similar nonbank service providers. As recently as November 2014, when FinCEN issued helpful guidance encouraging banks to provide banking services to MSBs, it noted concerns that many banks were “indiscriminately terminating” their MSB customers or categorically denying banking services to such entities due to (real or perceived) regulatory pressures.

The key, FinCEN stressed, is for financial institutions to maintain appropriately designed policies and procedures to assess an MSB’s money laundering and terrorist financing risks, and to assess these types of businesses and the risks they present on a case-by-case basis. As FinCEN observed, nonbank money service providers “play an important role in a transparent financial system.” These companies must have banking relationships to provide their critical services.

While the FinCEN guidance gave some comfort to financial institutions that provide services to MSBs, it didn’t address the role other regulators play in bringing enforcement actions against banks—including the DOJ, CFPB and FDIC.[1] If banks are expected to provide necessary services to MSBs, it is crucial that all influential banking regulators be aligned in supporting this goal.

We hope that the latest news posted by the FDIC educates banks, but doesn’t result in the “indiscriminate termination” of banking relationships. MSBs and similar nonbank service providers are integral to our financial system. We would like to see a safe harbor instituted for banks that provide banking services to licensed money transmitters, and to other compliant service providers that meet reasonable due diligence bank regulatory requirements.

[1] Many states already require bill payment companies to be licensed; however, interestingly enough, it is likely that Weichman’s service did not require licensing in Indiana, because the transactions were commercial in nature. Indiana limits regulation of money transmission to (among other things) receiving money for transmission “primarily for personal, family, or household purposes.”

In Viewpoints, prepaid and emerging payment professionals share their perspectives on the industry. Paybefore endeavors to present many points of view to offer readers new insights and information. The opinions expressed in Viewpoints are not necessarily those of Paybefore. This article is intended for general information purposes only and should not be construed as legal advice. Readers are urged not to act upon the information without first consulting an attorney.