There is a nuclear revolution going on in banking and payments with new digital challenger banks like Atom and Starling seeking to displace established FIs. Banks are turning to real-time payment infrastructures to retain customers and opening up under regulatory pressure to FinTech competition from mobile players and payment service providers (PSPs). Crypto-currencies, cyber-security and other tech challenges were also addressed at the Banking Technology Forum 2015, writes Neil Ainger.

“One of our key roles is to promote collaborative innovation,” said Mark Falcon, head of regulatory policy and strategy at the UK’s new Payment Systems Regulator during his keynote address at the Banking Technology Forum 2015.

The two other primary objectives of the PSR, which Falcon claimed is the first dedicated payments-only regulator in the world, are to promote competition and look after the user experience. “We can change the ownership of payment systems if needed and prices too, just like a utilities regulator,” he said. “We’re not a conduct regulator.”  That role is reserved for the UK Financial Conduct Authority (FCA), of which the PSR is an operational subsidiary with standalone powers.

Falcon went on to explain that the new PSR UK payments regulator, which effectively replaces the former Payments Council (now a consultancy) is going to oversee infrastructure providers,system operators, service providers and users. “The full UK ecosystem is covered and a UK-wide payment strategy is imminent. We’ll also be looking at back-end infrastructures and enforcing interchange fee rules, among much else.”

“Payment systems are driven by network effects with the value dependent on the number of users,” added Falcon, while emphasising the need, “for low barriers of entry to encourage competition.”

Next up was a financial technology  panel featuring Nicole Anderson (left), chief executive of Fintech Circle Innovate, which in her own words, “connects smart money to FinTech innovation and has the largest UK angel investor network”. She claimed UK FinTech investment went from $10 million in 2014 to $2 billion in 2015, a huge growth rate, reflecting interest in the sector.

“However, FinTech is many sub-sectors, FS segments and so on,” cautioned Anderson. “It’s not perhaps the most helpful term in this regard, as it covers many PFM tools, payment apps and so on, but technology is driving change.”

Lisa Moyle, head of financial services and payments at techUK explained how  her London-based organisation represents SMEs and mid-tier technology firms. “A lot of our members want to take on the banks, challenge and displace them. Others want to sell their innovation to the banks.”

“The future lies in the cloud which can deliver truly agile financial institutions (FIs) that aren’t so reliant on legacy and use cheaper, more open IT. This can encourage more competition,” added Moyle (right), while refuting the moderator David Bannister’s assertion that some banks are using FinTech innovation incubators and accelerators as effectively R&D on the cheap.

Fellow panellist, Mark Beeston, founder of the Illuminate Financial Management venture capital fund, and an ex-Deutsche Bank and ICAP capital markets player made a distinction between “US West Coast FinTech that is seeking to disrupt finance – via P2P crowdfunders, crypto-currencies, etc – and London and New York-based innovators that are seeking to disrupt operating models.”

“We don’t have an innovation challenge – there are plenty of chief innovation officers – but we do have a validation challenge,” said Beeston, highlighting the need to actually make these innovations relevant and accessible to consumers and the wider market. Rollout and dissemination is important – which is why the PSR regulator opened proceeding at the Banking Technology Forum 2015.

Outside of mobile apps, crowdfunding, PFM and other FinTech innovation tools, another potentially disruptive force in banking is the Bitcoin crypto-currency and other such offerings, which might replace other units of value in terms of cross-border retail payments, cards and such like. The next panel (left) comprising Lasse Birk Olesen, product officer at Coinify; Patrick Griffin, EVP of business development at Ripple Labs; and Professor Michael Mainelli, chairman of the Z/Yen consultancy were more interested, however, in the associated block chain technology. This is encouraging the use of secure shared public ledgers. It is this latter technology which is likely to be the true disruptor.

“Distributed ledger technology isn’t new, I’ve been tracking it for years. The first iteration was in 1974 from the Australian government. Ripple was invented in 2004,” said Mainelli. “What Bitcoin has done is remove objections that distributed ledgers were insecure (i.e. the block chain). This has caused renewed interest.”

According to Ripple’s Griffin: “Bitcoin was created as a currency, but it has failed in that role with less than 1m active users. It’s still searching for a quantifiable business case in comparison to say PayPal. That is why BitPay and others are pivoting towards bank ledger uses and away from consumer payments.”

“The true innovation is in the block chain technology,” continued Griffin. “You can now confirm changes to a central database and validate what is authentic and what isn’t – the shared public ledger is the engineering advancement. It potentially means you might be able to do away with central counterparty (CCP) clearinghouses and many other FIs in the future and it could impact risk procedures, collateral and so forth.”

How real is real-time? That was the question addressed by Gareth Lodge, senior analyst at the Celent consultancy as he introduced the next topic at the Banking Tech Forum of real-time payments. “The answer is very real – it’s here and it’s now.”

With the UK Faster Payment Service payments platform being replicated and improved upon elsewhere in the world from Singapore (again using VocaLink as the backbone technology provider) to Australia (with Swift as the implementer), infrastructure updates are underway around the globe. The US, India and many many other country’s are updating their backbone national domestic ACHs so that they can offer the services customers have come to expect since the advent of PayPal and online / mobile 24×7 service.

“Real-time is also getting faster,” said Lodge, alluding to the FPS near real-time functionality and how later iterations and competitive offerings elsewhere in the world are getting faster and faster. 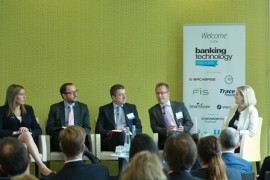 He was replaced on stage by the moderator of the next panel focused on real-time payments, Liz Oakes, KPMG associate director, who pointed out that each country faces different challenges. “That is why standardisation and harmonisation matters,” she said, as she introduced the key topic of the panel: ISO20022 and its adoption as an accepted standard for real-time payments projects. This is especially important considering the UK Payments Council’s recent initiative to encourage widespread ISO 20022 adoption via usage guidelines that vendors, end users and others can all commonly agree on.

Swift too is keen to encourage ISO 20022 adoption, although it has competitor bodies of course. Stephen Lindsay, head of standards at Swift commented they “want to converge on simple things”. This means:

All well and good but James Whittle, director of industry dynamics, Payments Council, countered: “There is no single authority that can say to the world ‘this is how we will do it’. The industry itself must do this via the International Standardisations Organisation.”

Different communities need different things. “ISO2002 is not a panacea,” said Fiona Hamilton, VP Europe & Asia, Volante. “You cannot standardise everything – look at the single euro payments area implementation where we ended up with different cross-border ‘flavours’ of XML. You have to allow for pan-regional or FS sector extensions within a common framework. XML is an extensible language, which is why it is useful. ISO 20022 is a lingua franca,” she concluded. This is why Common Global Implementation can develop it for corporates, Swift, vendors and others use it to innovate.

Chris Dunne, payment services director at VocaLink, commented that: “If we were starting afresh now on the UK FPS project we’d use ISO 20022.” At the time of its introduction the FPS used the card-based ISO 8583 standard instead because as he said: “We needed to get FPS launched quick. It has served us well and we have volumes of over a billion transactions now.”

Opening up the system
The EUs Payment Services Directive (PSD) II was introduced by KPMG’s Oakes as the focus of the next session at the show, as she explained how it is opening up payments initiation services on customer’s behalf and account information data-based services. 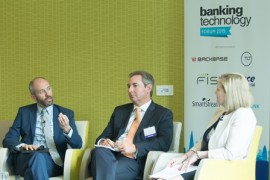 “There are a lot of opportunities around data, identification (ID), new payment service providers (PSPs) and so forth,” said Mark Hartley, chief innovation officer at Clear2Pay, which has recently been taken over by FIS. “However, many banks view it as a threat as newcomers can access bank-owned or run payment platforms.”

This is a real threat according to Maurice Cleaves, chief executive the UK Payments Council, who warned that in the future application processing interfaces (APIs) might be developed by merchants, not the banks. “Your relationship with your merchant might be stronger than it is with your bank in the future as you can now allow merchants to take a payment direct from your bank account without involving them,” he said.

“We need to ensure that this happens in a secure and effective manner, however,” said Cleaves, as he went on to outline privacy concerns and other potentially problematic issues surrounding the post-PSDII regulatory landscape in Europe.

“Ultimately, communities and users will decide what models and innovators will win out.”

You can view the afternoon session report here