US lags on EMV card adoption as October deadline looms 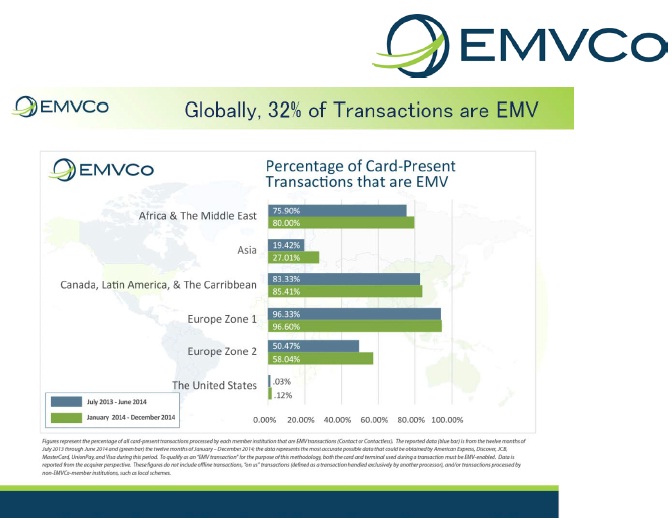 EMV transactions are on the increase, but the US lags behind

EMV card usage is increasing almost everywhere in the world as a billion new EMV cards enter circulation – but the US continues to lag behind, despite the fact that liability shifts to the retailer from 15 October this year.

EMVCo figures show that by the end of last year, the number of EMV payment cards in circulation had increased by 1 billion, up 43% to 3.4 billion from 2.4 billion a year earlier. The highest adoption rate is in western Europe, where EMV chip card adoption is now 83.5%, up by 2% on a year earlier. But the lowest adoption rate of any region was the US, at just 7.3% adoption. No earlier figures were available for comparison.

In the rest of the world, the fastest increases were in eastern Europe, which increased to 40.4% from just 17.4% a year earlier, and in Africa and the Middle East, where adoption rose to 50.5% from 38.9%. Canada, Latin America and the Caribbean followed at 59.5%, up 5% versus a year earlier, while Asia Pacific EMB card adoption increased to 25.4% form 17.4% a year earlier. The figures were based on statistics from EMVCo’s members – American Express, Discover, JCB, MasterCard, UnionPay and Visa.

EMVCo also reports that 32% of all chip card-present transactions – both contact and contactless – conducted globally between January and December 2014 used EMV chip technology,  up from 29% as reported in November 2014 by EMVCo.

“With an additional 1 billion EMV chip cards issued in 2014 and cumulative transaction volumes climbing in every region last year, it is clear from the data released today that the global roll out of EMV chip technology is progressing at a healthy pace,” said Tac Watanabe,  executive committee Chair at EMV Co. “The EMV Specifications delivered by EMVCo enable globally interoperable chip payments, so their growth in adoption is fundamental to the development of a more secure international payments industry. It is great to see that we are moving closer to that end goal.”

“From a regional perspective, the highest volumes of EMV transactions are occurring in regions with a significant base of deployed EMV cards and established acceptance infrastructures. We are, however, pleased to note a significant acceleration of card issuance in the US throughout the course of last year,” adds Sean Conroy, current Chair of the EMVCo Board of Managers. “We are aware that the US merchant and acquiring communities are actively enabling their acceptance environments and platforms to support EMV transactions and anticipate further advances will be made in this market throughout 2015.”