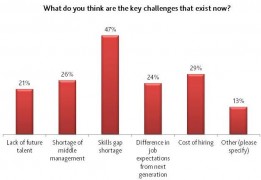 Recruitment firms fret about the future [CLICK TO ENLARGE]

Concerns over a growing skills gap and lack of future talent are the biggest worries among financial firms’ recruiters, leading to a renewed focus on graduate hiring.

Recruitment specialist Morgan McKinley conducted a study of 157 hiring managers to discuss the effects that the financial crisis had on hiring and their views on the current challenges they face, with a combined 68% of respondents stating that the biggest current challenges are a skills gap shortage (47%) and lack of future talent (21%).

“There has been much discussion around the negative impact of the financial crisis on graduate hiring, but our data doesn’t support this. Exactly half said that it impacted their graduate hiring” said Hakan Enver, operations director at Morgan McKinley Financial Services. ”If anything, it shows the UK finance sector as being resilient, even in the midst of a historical crisis.”

This good news for graduates comes on top of positive news about the financial services recruitment market in London, with Morgan McKinley’s Employment Monitor showing that growth in available jobs has continued to strengthen with a month-on-month increase of 14%.

Yearly figures for job opportunities saw an increase of 17% with those seeking new roles showing a big jump of 59%.

“From a job availability perspective, there has been some replacement, but there is a clear underlying trend of growth”, said Enver. “We’ve seen increases from every angle; month-on-month, year-on-year for both job opportunities and those seeking new roles. This is in line with what we predicted last month. With bonus rounds coming to a conclusion at the end of the first quarter, April is typically a month where we see people actively looking for new roles.”

The average salary change registered in April 2015 was 19%. “With improved confidence, there’s still a trend to expect a far greater salary increase when moving roles and thus it is a major contributing factor to people looking for new opportunities”, said Enver.