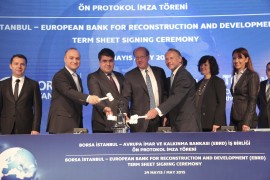 The plan was announced in Istanbul earlier today

The European Bank for Reconstruction and Development is in talks to acquire a 10% stake in Borsa Istanbul to support Turkey’s efforts to reshape its capital markets.

Borsa Istanbul, majority-owned by the Turkish government, is the only exchange in Turkey, formed two years ago from the merger of the Istanbul Stock Exchange, the Istanbul Gold Exchange and the Turkish Derivatives Exchange.

Representatives of the EBRD and the exchange met in Istanbul today to sign agreements that pave the way for a pre-IPO investment in the exchange.

Expected to take place next year, the IPO is part of the Turkish government’s plan to reshape the country’s capital markets and create a financial hub for the region spanning Central Asia, south-eastern Europe and North Africa.

Noel Edison, director for insurance and financial services at the EBRD, said: “This investment is part of the EBRD’s long-term strategy in Turkey to help the country deepen its capital markets. We will work to improve the efficiency and liquidity of the bourse to make it more attractive to domestic companies and foreign investors and will also help with the preparations for a successful public listing.”

Borsa Istanbul’s chief executive Tuncay Dinç said: “As a founding member of the EBRD, Turkey will benefit from the bank’s direct investment in Borsa Istanbul. This long-term pre-IPO investment is yet another indication of the great potential of Turkish capital markets and Borsa Istanbul. We consider this strategic partnership to be an important milestone on the road to making Istanbul an international financial hub.”

The EBRD made a pre-IPO investment in the Moscow Exchange and invested in the Bucharest Stock Exchange. IT is also supporting SEE Link, an order-routing system established by the Bulgarian, FYR Macedonian and Zagreb stock exchanges and aimed at increasing liquidity and advancing standardisation among the connected bourses.

Most recently in Turkey, the Bank has invested in YDA İnşaat’s first Turkish lira-denominated bond listed on Borsa Istanbul. It also works with the authorities on regulations and policies to further improve the functioning of capital markets.

The EBRD started investing in Turkey in 2009, since which time it has invested more than €5 billion in the country through some 140 projects in infrastructure, energy, agribusiness, industry and finance. It has also helped raise more than €12 billion for these ventures from other sources of financing.