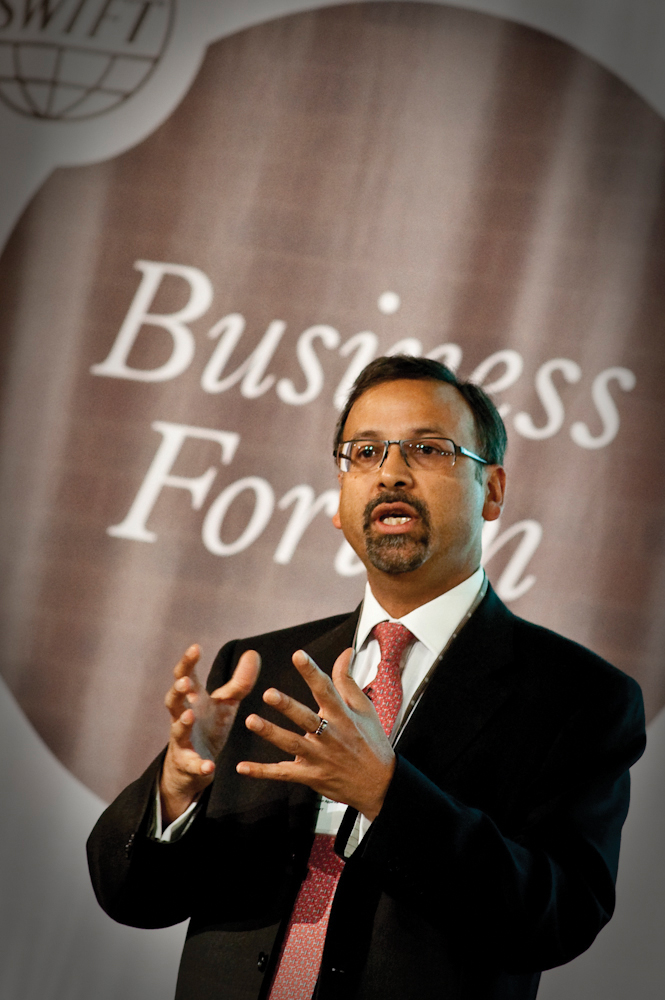 Aggerwal: banks need to stay relevant in the face of an ‘unstoppable’ evolution’

Banks have been warned that new entrants will come and ‘eat their lunch’ if they fail to remain relevant to the modern consumer in the face of an ‘unstoppable revolution’. The point was made repeatedly during sessions at the Payments International conference in London this week.

Fears that competitors such as PayPal, Google, Apple and supermarkets such as Tesco may enter the traditional banking services market and disintermediate the world’s major financial institutions are not new – they go back at least a decade, when Amazon and eBay were seen as a threat. Even earlier, the card schemes such as Visa and MasterCard disrupted the industry. But like a recurring nightmare, fears of disintermediation keep coming back.

“We’ve moved beyond questions about the business case for real time payments,” said Arun Aggerwal, managing director, UK, Ireland and Nordics at Swift. “You now need to ask, are you relevant any more? Because if not, there are services like AliPay, Apple Pay, Bitcoin. This rapid evolution is an unstoppable force. There are a whole range of alternatives waiting to eat your lunch.”

Not everyone is convinced that the challenges pose much of a threat to established banks. Some delegates believe that as the challengers are forced to comply with the rising tide of financial services regulation, they will be forced to change their infrastructure and may be co-opted by the mainstream financial system. However, others disputed that claim and questioned whether consumers actually a need a bank at all. “For the unbanked customer, why do banks exist?” said Ben Hammersley, editor at Wired magazine and guest speaker on payments challengers. “Bank statements are terrible. Something much, much better is going to come along. If you are thinking that this is going to be regulated away, you are dead. You just don’t know it yet.”

In many cases, the ability to run real time payments is seen as key to enabling a whole host of competitive services to enter the market. Aggarwal pointed out that real time payments now often refers to a system that operates 24 hours a day, seven days a week. Such a system requires confirmation for both parties to a transaction, and it needs to be irrevocable. There are already 18 such systems live, with another 12 countries in various stages of planning. While in some counties such as India, there are advantages to some institutions from maintaining conventional processes due to fees that can be charged, the global trend is towards faster and more sophisticated infrastructure.

However, delegates did not necessarily agree that real time payments infrastructure is necessary or even desirable in all cases. In the US, the issue is still being debated. Sceptics argue that there is no problem that needs solving. According to Russ Waterhouse, EVP product development and strategy at The Clearing House, consumers “already have real time point of sale debit cards, so where is the compelling need we are trying to meet?” Waterhouse added that the danger of allowing non-bank service providers into the market is that they might open the customer up to cybercrime. Since these alternative providers need access to bank credentials, usernames, passwords and debit cards, it is a safety issue that may not be in the public interest, he added. “I think it’s putting a lot of banks and their customers at risk. We need a bank-centric payments model.”

Liz Oakes, associate director at KPMG, added that many small banks and non-banks may not want 24/7 payment services. “Their product range may not be based on that, they may be a small business and they might not want to push that agenda,” she said. “It may not be a business case for them. The model needs to be flexible enough to allow those who want to play to do it, and for others who want maybe an 18 hour day, to find an architecture provider that will enable them to interface with the system in the way that they want.”

Delegates were not just concerned about the speed of settlement for transactions. For Steve Ellis, EVP and group head of wholesale services at Wells Fargo, the ability to bring products to market quickly is just as important.

“You should be able to build and deliver in 90 days or less,” he said. “If you’re not creating an iterative process, that’s an issue. We roll out a new service every 90 days. That’s why we are making a killing – because most banks don’t. In 1990, people were getting excited about PCs. Now I don’t even use a PC, I used an iPad. Perhaps in the future it will be wearables. I don’t think anybody knows. But you have to be agile.”

Competition also comes in the form of new banks, such as supermarket chain Tesco. According to David Rockliff, head of payments at Tesco Bank, it may be that the days of the full-service bank are numbered as more targeted businesses begin to corner the market.

“It’s hard for full-service institutions to respond due to their sheer size,” he said. “Our target at Tesco is people that shop at Tesco supermarkets. If you’re a corporate and you don’t shop at Tesco, then you’re not really our target. I think it’s going to be a tough decade for the full-service banks and I think we will see more segmentation.”

One of the factors enabling such competitors to enter the market is their lighter footprint. Like other challenger banks such as Metro Bank, Tesco Bank has outsourced much of its back-end processing and technology to specialist providers. While traditional banks have tended historically to run nearly all their processes in-house, Rockliff believes this is no longer necessary or even desirable.