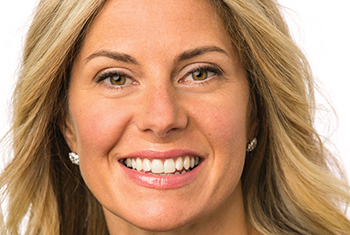 Nauiokas: Anticipation is the future

When Amy Nauiokas left her job as chief executive of Barclays Stockbrokers in 2008, she was taking a risk. Two years earlier, at just 34, she had become one of the most successful women in finance. Before that, she’d been head of e-commerce at Barclays Capital. She was already known for her efforts rebuilding the team at Cantor Fitzgerald in New York in the years after 9/11.

But the world was changing fast, and the rising star felt that the time was right to do something different – to embrace change as a force for good in the financial sector and in wider society.

“I had all the things you are supposed to have – the degree, the analyst programme, the experience – but I just didn’t want to follow the linear path to the CEO room,” she says. “I saw my peers moving to the dot-coms. I could see the world changing before my eyes, and I thought, ‘There has to be a way to take advantage of this’. There is so much more we could achieve.”

Nauiokas identified a number of places where technology was driving growth in the business. The decision helped to separate her from the pack – and to get noticed. But it was hard to be an evangelist for new ways of doing business within one of the world’s largest financial institutions. “You spend all your time convincing people,” she says. Eventually, she decided to leave. “And that’s when we started putting Anthemis together.”

Nauiokas and co-founder Sean Park called the company that she is now president of Anthemis after a flower related to chamomile. It was, she says, a name that was carefully chosen: the flower is said to nurture other plants around it, so like its namesake, the company’s advisory and investment arms aim to have a nurturing role – in this case, for innovative fintech start-ups. Anthemis has a portfolio of 27 smaller companies, including the likes of eToro, an online social investment network, as well as cross-border payments company Azimo, online-only Fidor Bank, Moven, The Currency Cloud and many others.

From the beginning, the new company set out to be different. At its London office, there is a bookcase near the lobby filled with books, each on a different country, city or region. A note explains that these represent the home of each individual Anthemis employee. Inside Nauiokas’ office, there is another bookcase, containing a far more varied range of books on all kinds of topics.

“Each employee has to bring in three favourite books,” she says. “We really focused on hiring the people with the right DNA. We wanted people that have interests outside the office. They also need to have the right mix of experience in the industry, combined with being something of an ‘outsider’ with a fresh perspective. Once you join a large institution, you have perhaps eight months of adding value, before you become sucked into the internal culture and start to lose the value-add. We all come from this space, but it’s that outsider perspective that’s so important for our clients, because we know how those ideas can make a difference on the inside.”

The business idea behind Anthemis was that the world is changing. For years, themes such as Big Data, cloud computing and mobile payments have been gracing the agendas of financial services conferences such as Sibos (where these were the primary themes in 2010). But according to Nauiokas, the big difference now is that for the first time, people within the major financial institutions are actually listening.

“We have seen an interest in transparency and a cry for openness and fairness of markets. Some of it is not new – at Barclays from 2006-8, a big part of the driver for what we were doing was giving the customer the tools to manage their own future. But 10 years ago, only the super-wealthy could access these kinds of tools – the kind of people that were already making investments and getting into day trading. Now the tools are much more sophisticated.”

They are also different from previous tools in other ways. Nauiokas points to a company in the Anthemis portfolio called Trov – a service that is designed to act as a kind of ‘digital treasure trove’ that values a customer’s non-financial assets. That means things such as furniture, art work, jewellery and other items, most of which are usually found at home. Trove has an e-commerce and a social aspect, since once priced these items can then be placed up for sale on the site’s online marketplace. They can also be ‘shared’ with friends and family. The idea is a reflection of the idea that entrepreneurs are increasingly used to living in a mobile, digital world where everything is accessible via smartphone and internet connection.

While the emphasis and standards in financial services may be evolving, often prodded along by regulation, the underlying demography is also playing a role, particularly in wealth management. Much of the new wealth generation taking place in the 21st century is taking place away from the developed markets in North America and Europe. Instead, places like the Middle East, India and Asia are accumulating wealth. Many of the newly affluent members of society in these regions are relatively young.

All this is not to say that banks are behind in any sense. In many cases, financial institutions are eagerly partnering with or acquiring promising new start-ups in the fintech sector. Events such as the Citi Mobile Challenge tour the world in search of talented developers with bright new ideas. Other events such as Swift’s Innotribe Startup Challenge have become an established fixture in New York, London and Singapore every year. Other banks such as RBS are also exploring their own partnerships. According to Nauiokas, it would be unfair to categorise these banks as behemoths – in fact quite the opposite. Many of the individuals ‘get it’ from a technological point of view and are very focused on acquiring the right start-ups to keep their business cutting edge. Those that look seriously into the future, she believes, will be the winners.

“We love incubating new companies,” says Nauiokas. “A big part of our role is not just as a provider of capital – it’s to really get into deep conversation with these companies, and understand how our experience can help them. Yes, there is a commercial aspect – we wouldn’t invest if we didn’t think they could succeed – but it’s very positive to take time out to help incubate young companies and entrepreneurs. It’s better for everyone. In this world where ideas are being encouraged, everyone wins.”

One of the challenges the company faces is to go one step beyond current abilities, interesting as these might be. For example, a service such as Netflix is able to successfully recommend films and TV programmes to users, based on the user’s browsing habits and history. But Nauiokas points out that while such abilities can give the customer what they needed yesterday, it may not necessarily be so good at predicting what the customer wants tomorrow – or even learning when it might be time to try something different.

“It can use what you put in, but is it aware of context?” she says. “Finding ways to anticipate what you need instead of repeating what you did previously is the future.”