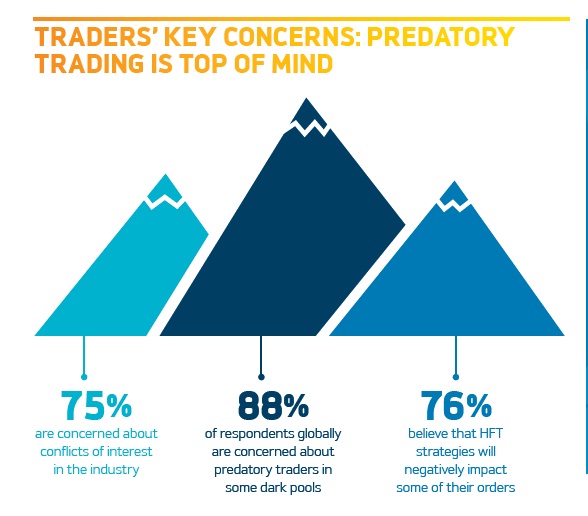 Long-term investors are deeply concerned about their ability to find liquidity and don’t trust regulators to protect them, according to a new survey by buy-side block trading network Liquidnet.

Liquidnet’s annual Institutional Voice survey found that 90% of buy-side respondents are afraid that predatory high-frequency traders are preying on their flows, even in some of the dark pools that are supposed to shield them against market impact. Overall, 76% of respondents believe that HFT strategies negatively impact some of their orders, with 88% concerned about predatory traders in some dark pools.

It also found that less than 10% of the US firms surveyed had confidence in the US Securities and Exchange Commission’s ability to make decisions that will positively impact market structure. In EMEA, less than 4% of the firms surveyed had confidence that the European Commission’s upcoming MiFID II would have a positive impact. Additionally, 72% of the firms in the region were concerned about the FCA’s proposed changes to the way research is paid for.

Broker or venue conflicts of interest are also among the top concern for investors, with two thirds ranking this as a high concern. “Conflicts of interest exposed over the past year have been a real eye-opener for the buy-side and this has led to greater scrutiny of trading venues. What has become apparent in this process is that only a handful of venues can provide the trust, transparency and liquidity that the buy side needs to deliver performance,” said Tony Booth, head of EMEA sales at Liquidnet.

Preserving alpha also remains a priority for institutional asset managers worldwide, with the majority citing the ability to source block liquidity as a key factor impacting best execution, followed by information leakage and venue and liquidity fragmentation. The majority of asset managers surveyed believe consolidation in trading venues is inevitable, in particular among US dark pools where they expect the number to decrease by 33% in 2016.

Market confidence will be a key trigger for greater inflows according to two thirds of respondents, far ahead of the rise in interest rates which was seen as a driver for only one in 10 respondents. Geographically, US and Western Europe are seen as having the highest investment potential; however, markets such as China and India are catching up in third and fourth place respectively.

“Buy-side confidence in equity inflows reflects the improving macroeconomic conditions,” said Brennan Warble, head of US Equities at Liquidnet. “But along with this increased confidence, the need to source the right liquidity has become more important than ever. Access to global liquidity pools and new sources of liquidity will be crucial to buy-side firms achieving best execution for their investment decisions. The other side of the trade may often be an investor on another continent, but they will only discover each other if they’re directly connected on the same global network.”

Even as confidence in equity inflows returns, 84% of the survey’s respondents were still either “concerned” or “very concerned” about being able to source liquidity in the current market. Nearly two thirds of US and EMEA asset managers expect an increase in equity inflows in 2015, with US asset managers marginally more confident that these inflows will be significant.

The survey was based on canvassing 115 buy-side equity traders around the globe.