80% of banks to replace core systems “within five years” 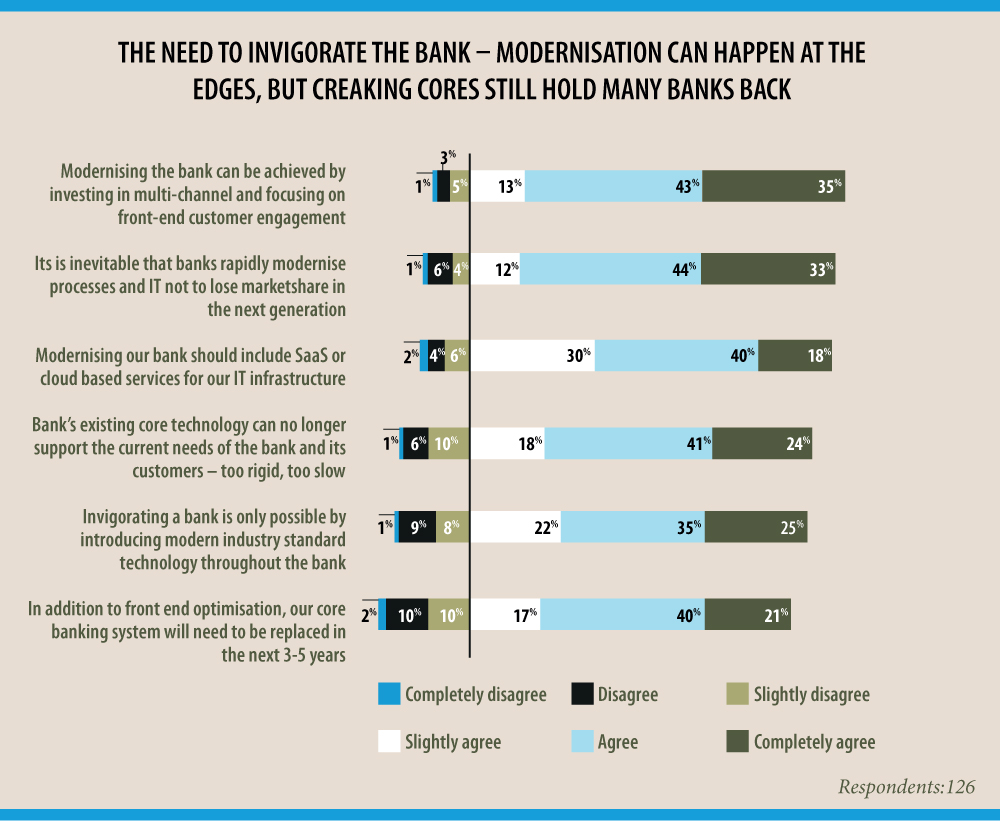 Four out of five banks believe they will have to replace their core banking system in the next three to five years, with nearly 90% in favour of including SaaS or cloud based services as part of the infrastructure, according to a new survey of senior bank executives.

In the report, Invigorating Banking, sponsored by fintech firm Five Degrees and carried out by Finextra Research, the results revealed strong support for core system replacement and renovation. Some 83% of respondents believe their bank’s existing core technology can no longer support its needs. A further 89% believe that it is inevitable that banks rapidly modernise processes and IT to avoid losing market share.

Many banks planned to respond by working with new technology providers, even where these have fewer customer references, so that the bank can ensure that it implements standard service oriented architecture (66%). A slim majority of banks still believe that IT is a unique selling point and will continue to rely on their own in-house development teams for niche technology that fits the bank’s strategy (61%). However, banks were split down the middle on whether to stick with their current technology provider, following its migration and upgrade process even if it would not provide the benefits of newer SOA technology (50% versus 50%).

There were also geographical differences in how the banks planned to respond to these challenges. While support for new cloud based platforms was strong overall, it was lowest in western Europe, where only 51% were strongly in favour, versus Asia Pacific, where the equivalent figure was 76%. Yet , across all banks, 97% believe that the bank needs to be able to offer new financial products and services faster.

On others areas there was virtually unanimous agreement. Some 97% of respondents agreed that security must be improved for customers due to the increasing risks associated with multi-channel technology. Likewise, overwhelming majorities supported the need to equip bank staff and customers to a higher level of self-service (97%). Unsurprisingly, 82% agreed with the statement that customers prefer an excellent mobile channel over a branch nearby.

However, there is still a place for face to face dialogue. Responses were strongly divided over whether customers prefer an efficient virtual dialogue over a personal one to solve financial matters (52% in favour, 48% against) – suggesting that banks are far from confident that the branch can be done away with entirely.

A number of obstacles to modernisation were identified in the report. One of the biggest was the difficulty of getting a sponsor at boardroom level (71%). Another was regulation: 67% believe their bank is too busy with regulation and compliance to think about innovation and modernisation. Yet at the same time, regulation also appears to be prompting change, since 92% of respondents believe that modernising their systems and processes is necessary to comply with constant regulatory change.

The threat of new entrants and disruptive competitors rate highly in the responses. Some 77% of respondents recognise new market entrants such as Google and Apple as a real threat that could steal their customers. Most respondents (56%) also felt that the digital only banks like Moven, Simple and Frank are a serious threat. However, the presence of new challenges is not necessarily seen as entirely negative – fully 88% of banks believe that new market entrants have a positive effect on the traditional banking scene by keeping banks focused.