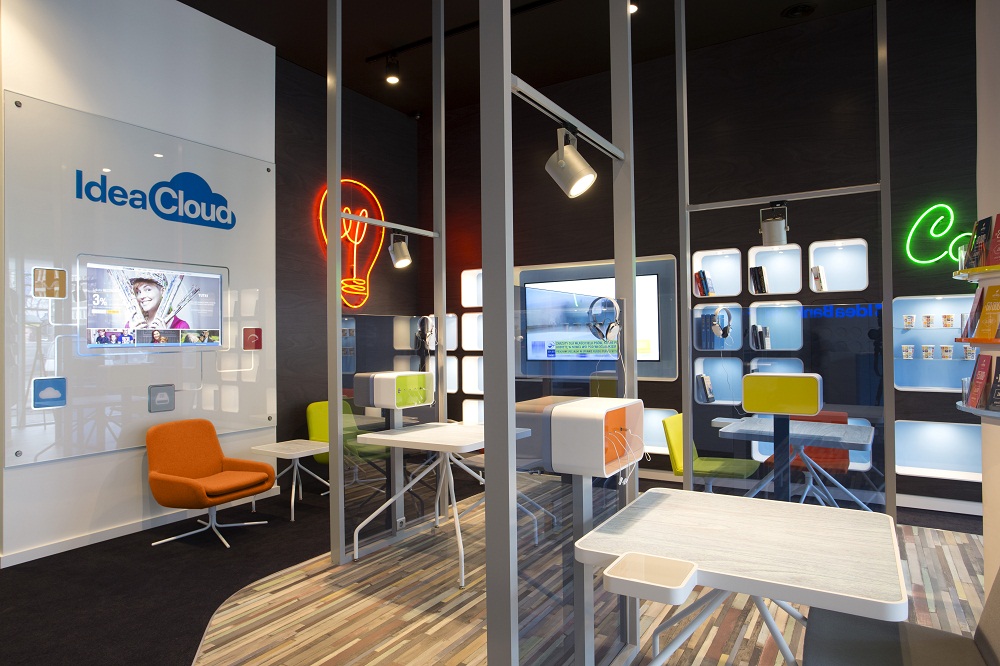 Idea Bank is targeting its new hub at entrepreneurs

Poland’s Idea Bank has launched an experimental branch aimed at corporate clients. The ‘Idea Hub’ bank branch was created to test the idea that innovative bank branches can attract customers and provide a complementary service to online and mobile banking services.

Most of the space available at the new branch has been set aside for entrepreneurs. The bank branch has a co-working area and bookable conference rooms. The rest of the branch consists of showrooms, mainly intended for entrepreneurship training sessions and meetings with the bank’s representatives.

Most of the customers of Idea Bank are small-business owners. The bank has fitted its Idea Hub branch with office facilities including printers, scanners and copiers and unlimited Wi-fi. It also has TV, daily updated economic press and free coffee. There’s an app for customers that want to book the conference room and the bank has employed a team of specially trained baristas to ensure there is a pleasant atmosphere and good working conditions.

Idea Hub is targeted particularly at sole proprietors who lack a permanent office. These customers would usually be found in overcrowded coffee shops and other places in the town centre, according to Idea Bank, and would benefit from having their own area.

“Idea Hub’s project stands in complete opposition to the current global trend of turning the emptying bank branches into so-called high-tech branches, crammed with electronics, located in shopping malls, and usually just doubling tools already available on mobile devices,” said Dominik Fajbusiewicz, Idea Bank board member and the originator of the Idea Hub concept. “I think the only functionalities that may encourage customers to actually visit a branch are those you cannot offer virtually.”

Retail banking customers across Europe have been visiting bank branches less and less over the last few years, as the majority of banking tasks can be done online or via mobile. But Idea Bank notes that its clientele of small business owners tend to visit bank branches a lot more than the average retail customer.

One reason for this is that they need to deposit their daily income. According to research carried out by Idea Bank, 32% of micro-companies only accept cash transactions, while the remaining 68% combine cash with other kinds of transactions. A survey conducted by PwC and Impactor shows that 66% of SME owners visit their bank at least once a month.

The first Idea Hub can be found at 87 Marszałkowska Street in Warsaw. It is open Mon-Fri 8:00 AM – 8 PM and Sat 9:00 AM – 12:00 PM. The next Idea Bank’s new-generation branches, larger and enriched in further solutions for business, will soon be opened on Polna Street, Warsaw, and then in the next three biggest Polish cities. Idea Hub’s project and interior design was developed by Iwona Bakuła.