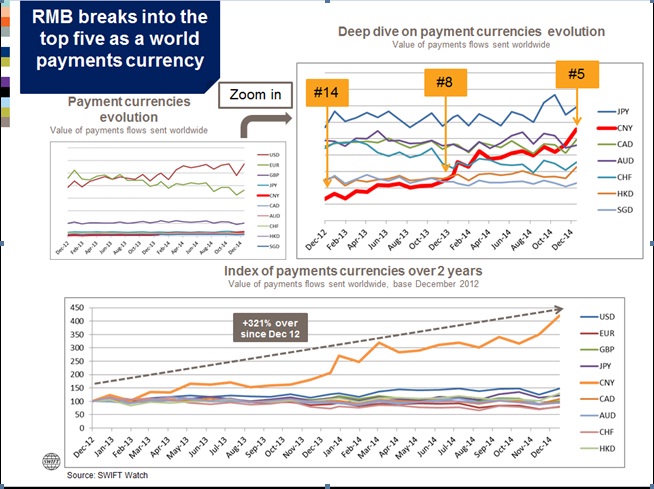 The Chinese renminbi has become one of the world’s top five payments currencies, according to new figures released by Swift. The currency, first introduced to foreign investors in 2007, overtook the Canadian dollar and the Australian dollar in the last two months of 2014 to reach the top five.

The currency has seen a spectacular rise over the last two years. In January 2013, the RMB was ranked at position #13 with a share of 0.63%. In December 2014, the RMB reached a record high share of 2.17% in global payments by value and now trails the Japanese Yen which has a share of 2.69%.

“The RMB breaking into the top five world payments currencies is an important milestone” said Wim Raymaekers, head of banking markets at SWIFT. “It is a great testimony to the internationalisation of the RMB and confirms its transition from an “emerging” to a “business as usual” payment currency. The rise of various offshore RMB clearing centres around the world, including eight new agreements signed with the People’s Bank of China in 2014, was an important driver fuelling this growth.”

The market for Renminbi has become increasingly competitive in recent months, as several cities vied for position as the top offshore renminbi centre. In November 2013, Industrial and Commercial Bank of China launched a $329 million renminbi-denominated bond in London, marking the first time a Chinese bank had done so and a significant boost for London’s ambitions in the currency. In September 2014, BNY Mellon estimated that London and Singapore would become the dominant offshore hubs for the currency alongside Hong Kong by 2020.