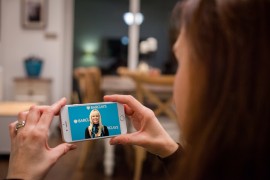 Barclays says it is the first in the UK to do video banking via smartphone, tablet and PC

Barclays has launched a new video banking service on smartphone, tablet and computer that claims to enable face to face conversations any time, anywhere. The move represents the next step for video banking in the UK, where the technology has previously been tied to a bank branch.

The video banking service is available on all iOS and Android devices via an app, and can also be used on PC and laptop via a plugin. It will be available 24/7, and will always connect customers to a specific member of staff they have spoken to previously, whenever this is possible.

Due to be launched on 8 December, at launch it will only be available to Premier customers. Next year, Barclays plans to extend the service to mortgage, business and wealth management customers from early 2015. After that, it will eventually be rolled out to all retail customers, the bank says.

The new service isn’t the first video banking facility in the UK – other institutions, such as building society Nationwide, have been rolling out video banking installations at their branches across the country since the start of this year. Barclays itself already had video banking in its UK branches. However, it is the first major provider to start offering video banking on smartphones and tablets.

“While many of our customers are increasingly using digital channels to complete routine transactions, for the important moments, you just can’t beat face to face conversations, yet traditional branch opening hours don’t always give customers that choice,” said Steven Cooper, chief executive, personal banking at Barclays. We will finally be able to interact with customers completely on their terms, rather than ours.”

Video banking has existed for many years. The first trials of the technology took place in the 1990s at the UCL campus in California. But it is only within the last couple of years that it made significant progress, especially in the US and Asia.

Last year, Citi rolled out a new kind of ATM designed to help customers do virtually all their banking without visiting a branch. The Citibank Express ATM is equipped with an online banking connection, video conferencing and biometric identity authentication. Users can open accounts and apply for loans, cards and cashier’s cheques using the device; transactions can also be started on a computer or mobile device and completed on Citibank Express or vice versa.

In April, Bank of America launched a new ATM service that allows users to have a video conversation with a human teller at the machine. The new service, Teller Assist, uses real-time video to connect the user with English and Spanish speaking tellers so that they can benefit from the kind of personal interaction that would normally only be available at a branch.