Our data show that relevant features and effective promotion are critical for achieving the highest levels of consumer adoption of mobile banking. In a recent white paper, I outlined several strategies to drive adoption and increase ROI in mobile banking apps. In this article, I’ll focus on some common obstacles to greater mobile banking adoption and the product features that will help you get more consumers engaged in your mobile app.

From busy consumers who don’t have time to visit a branch to digital natives who’ve grown up expecting remote access to financial and other services, consumers of all types can appreciate the ability to bank anytime, anywhere. So, they’re no longer content with only simple mobile banking functionality, such as checking balances. They expect a wider range of features. For instance, they’re increasingly looking for mobile deposit capabilities; yet, only about 42 percent of financial institutions offered this option in 2013, according to a Celent report. Financial institutions that fail to invest to keep their mobile banking features current should expect adoption to lag.

Not only are next-generation mobile banking features desirable, their absence can prompt consumers to switch financial institutions. According to the AlixPartners Mobile Financial Services Tracking Study, 60 percent of smartphone or tablet owners who switched primary banks said the financial institution’s mobile banking capabilities were important or extremely important in the decision. Investing in next-generation mobile banking product features that meet consumer demands and suit their lifestyles is vital.

Product Features that Move the Needle

Fiserv analysis reveals that the addition of each new product feature described below leads to incremental consumer adoption and usage of mobile banking. Certain mobile enhancements are especially effective in spurring an uptick in mobile activity. Financial institutions that offer mobile deposit average approximately 60 percent more logins and transactions per month per customer compared to those that don’t include mobile deposit as part of their mobile banking service, according to a proprietary Fiserv 2014 study. Tablet banking capabilities also can boost enrollment and usage, since consumers conduct as much as twice as many financial transactions per month on a tablet than they do on a smartphone, according to our analysis.

Mobile Deposit:  With mobile deposit, the accountholder can deposit a check by capturing an image via a tablet’s or 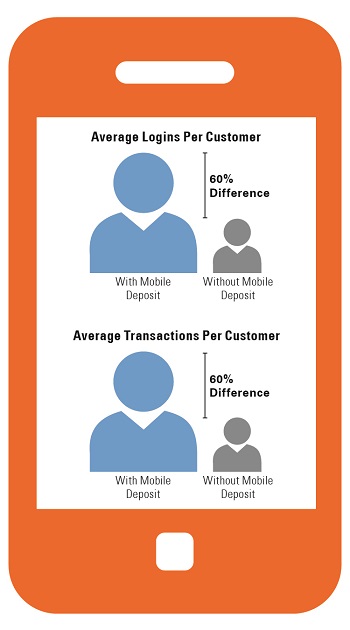 smartphone’s camera feature. Adding and promoting mobile deposit can significantly increase mobile banking registrations. Mobile banking adoption is approximately 55 percent higher for those financial institutions that offer and promote mobile deposit as compared to those institutions that don’t offer or market the service, according to the Fiserv study.

Tablet Banking: According to the tablet banking forecast from Javelin Strategy & Research, 53 percent of U.S. adults owned a tablet in 2014, and that figure is expected to reach 72 percent in 2018. The same study found a dramatic rise in tablet banking: More than 1 in 4 consumers—about 68 million people—now use tablet banking, and more than half of tablet owners had used the device for banking in the previous seven days. Tablet owners are more engaged with their devices than they are with a smartphone—spending more time on the tablet and conducting more banking transactions on the device as compared to a mobile device. By offering functionality well-suited to the tablet’s larger screen and the length of time consumers spend using it, you can enhance the mobile banking experience and boost its perceived value.

P2P Payments: Person-to-person payments, also called social payments, are valuable for consumers who want the flexibility to make occasional or recurring payments to other consumers or small businesses when and where it’s convenient. Besides strengthening the mobile solution and attracting registrations, this service can generate revenue if the institution chooses to charge a fee for enhanced services like expedited payment delivery.

Actionable Alerts: Delivering alerts via mobile keeps consumers informed of account activity, balances and other vital information. Turning those alerts into actionable notifications that enable accountholders to respond in real time makes this feature significantly more useful. You can enhance your mobile banking by delivering actionable alerts via SMS or push notifications. Busy consumers will appreciate the ability to stay informed of their finances and the option to take immediate action—all while on the go, using a mobile device.  A low balance alert that enables a customer to respond in order to transfer money from their savings account to their checking account is the type of actionable alert that cam make financial management easier for consumers.

Achieving high adoption for mobile banking demands the features consumers want. But financial institutions also must have a comprehensive, integrated marketing program that leverages best practices proven to boost enrollment and usage. For more details on how to leverage marketing and staff engagement to boost mobile services adoption, including the role of call center employees, download the full white paper here.

John Moon is senior manager of adoption marketing, digital channels with Fiserv and has more than 12 years of experience in consumer marketing. John provides consultative services, thought leadership, best practices and marketing resources for Fiserv clients. This article is adapted from a Fiserv white paper. For the full white paper, click here. John can be reached at [email protected].