Turkey is an innovative market for mobile financial services

Banks are pioneering advanced technologies in Turkey, giving the country a headstart over many of its European counterparts. In Istanbul, Garanti Bank explained how it pays for its customers to get mobile internet access – and how it is using social media to attract and keep customers.

“In Garanti, everyone believes mobile is the future,” said Deniz Guven, head of digital channels at Garanti Bank. Speaking to Banking Technology at the Wincor Nixdorf IMS conference in Istanbul, Guven explained that it is necessary to change the culture of banking. “The smartphone has a central place in life now,” he said. “People wake up in the morning, they check Facebook while they get dressed, check the weather and read emails over breakfast. The customer may Skype his girlfriend at work, upload a picture of his cat on Instagram at lunch time and order dinner via mobile on the way home. If we don’t think like this, how can we catch our customers?”

The Turkish banking sector is fiercely competitive. On a walk around Istanbul, it seems as though every bank branch is a different brand. The country has some 49 banks, of which the top 13 have at least 250 branches or more. Established in 1946, Garanti Bank has 947 of them – but it is the mobile app that really takes centre stage in the bank’s ambitions. The bank launched iGaranti in August 2013, an app that allows customers to send and receive funds with their Facebook friends, pay bills, withdraw cash using a QR code, navigate by speaking to the phone and receive targeted offers from retail brands that the customer likes. Garanti has also just launched its ‘Ask Garanti’ service, which aims to answer any question within an hour.

In a country where 50% of the population is under the age of 29, and where Facebook usage is at 94%, some banks have decided that it is even worth paying for internet connectivity to get customers active. Garanti bank pays the internet connectivity cost for some of its customers when they access its mobile services. Turkey still has 25 million unbanked customers, and banks are keen to connect with these people, many of whom live in the more remote, less economically developed eastern regions of Anatolia. 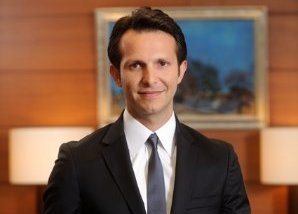 “The main barrier there is smartphone adoption,” said Guven. “But we try to be responsive, so even if you are using an old Nokia phone, you can use internet connection to use mobile banking. We understand that the cost is sensitive, so we pay. The unbanked often have cash under a pillow. Using their phone, they can take it to an ATM, load it in and see it on their phone. These customers are not a big source of profit today, but sustainability is the answer to competition: they have great potential.”

Guyen checks the comments left by users on iTunes, Amazon and the Google Play store every day. He says the comments are valuable. He also says that with the bank’s ATMs, users don’t have to be a Garanti bank customer – they can still use the ATM to make cardless cash withdrawals using a mobile device.

“You don’t need an account,” he said. “If you don’t then it’s OK. That’s why we have a cardless strategy, you can come to our ATM and make a payment for bills. You can deposit money to someone. You can pay your rent. It’s a great way to reach the unbanked. Tomorrow, you never know, they might start using our services. It’s a great channel to catch them.”

Telcos have played a significant role in broadening financial inclusion and spreading new forms of mobile financial services in Turkey. In December, Garanti Bank and mobile operator Turkcell partnered with Visa Europe in a deal aimed at bringing the Turkcell mobile wallet to more consumers in Turkey. Turkcell had already signed up Turkey’s Akbank to the wallet, using a micro SD contactless solution, as well as local bank Yapi Kredi, which launched a solution for iPhone called iCare.

As early as April 2013, Turkcell had also integrated Turkey’s public transport card Urfakart into its mobile wallet, meaning that customers on trains and buses in Turkey’s Sanliurfa province could pay using their phones. Garanti Bank is the second largest private bank in Turkey, with an estimated 12 million customers and 936 branches in the country.